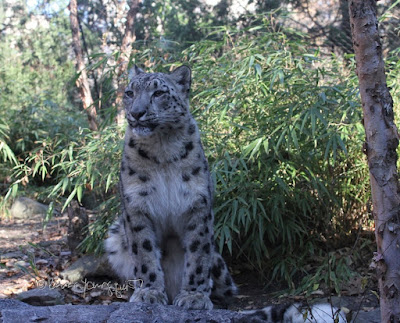 This past November when I had out of town guests, I was treated to a trip to the Central Park Zoo.

Up until that time I had been enthused about going to zoos as I always feel badly when I see caged animals but after watching an interview (which I've referenced in prior entries including one posted on 12-14-2019) with Jane Goodall where she discussed how zoos can raise awareness re a number of creatures, my attitudes have change.

I have confessed my change of heart within prior entries here on Blogger where I've discussed a number (more than ten) of wild birds (including Black Swans, Parrots, Pied Avocets, a Red-crested cardinal, a pair of Scarlet Ibises, a Superb Starling, a Taveta Golden Weaver, a Victoria Crowned Pigeon, and a couple of White-naped Cranes) whom I encountered during the aforementioned trip to the zoo.

During that visit to Central Park's zoo, I also came upon a Snow Leopard who can be seen in the images atop this entry.

The zoo has this to say re this creature: "Endangered. It's been estimated that the wild population numbers only 4,500 to 7,500 animals. They are hunted for their coats as well as their bones, which are ground up and used in traditional Chinese medicine. They compete for food with people, who often kill snow leopard's favored prey. And when the cats turn to domestic livestock for food, they're often shot by ranchers." 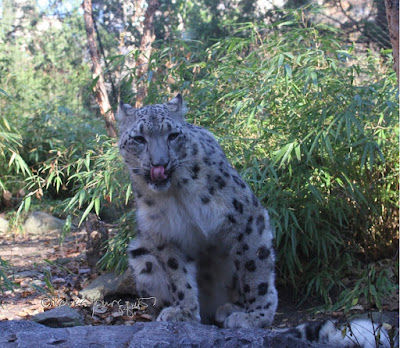 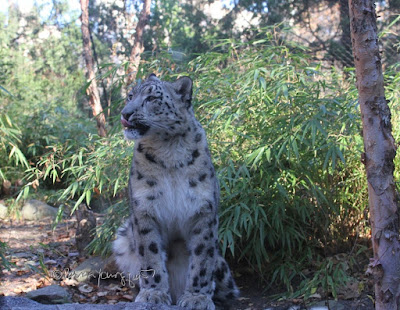 Initially I thought my thought re seeing this animal would make an interesting blog post but after researching Snow Leopards, I've come to the conclusion that I have nothing to add to any discussion about them, therefore, dear reader, I'll simply refer you to some links that provide content about this animal type:

During my research, I happened to think about the fact that at one time my Mac Book Pro's operating system  was called Snow Leopard so I did some research on that matter and because today would be Steve Jobs's sixty-fifth birthday had he not died in 2011.

Below is an excerpt from what I found out re the name choice of Snow Leopard as an operating system, one of the last things to be introduced by Steve Jobs before he passed:

"The great Mental Floss blog actually did the research on something that occurred to me as soon as Steve said 'Snow Leopard' during the keynote -- naming an OS after a cat 'sometimes known as the ounce' might not be the best idea.

File this stuff in the 'didja know' column: snow leopards aren't actually leopards -- they're actually closer in family to cheetahs, which means that the new OS might be a little closer to Aqua than we're all comfortable with. Also, they're pretty timid -- not only can they not roar (so new audio features in the OS are out), they're known to hide behind their fuzzy tails. We'll put it this way: you wouldn't exactly want to call your football team The Snow Leopards, so we're not quite sure why Steve decided to use the moniker."

Additionally, "the unofficial Apple Keynotes channel" has a video which discusses the choice of naming an operating system Snow Leopard.

Rather this operating system was the best and ultimately ruined by updates to Apple's operating systems, or rather the name Snow Leopard may not have been the best choice given the animal's associations, on this date of Steve Job's birth, I prefer to focus on his accomplishments as well as his contributions and to say, "Well done, Steve Jobs!' 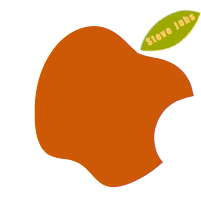