In my last posting here on Blogger, which was last Thursday, December 10th, 2020, I mentioned that we were having a snow day. That incident was a wet snowfall and the accumulation was not much, nor did snow stick on the ground.

Yesterday, December 16th 2020, six days after the aforementioned event, we had another snowfall in NYC. According to news repors, including NY1, "This is the biggest December snowfall since 2009, when we [NYC] recieved 10.9 inches that year.  It also doubled New York's total winter snowfall from last year, with 10.5 inches at Central Park."

Most of the snowfall has ended as of this blog post.

The atmosphere it created in my garden was truly magical as you might surmise from the photograph atop this entry which I took late last night. In the next image you can see how my garden looked in relation to the buildings in close proximity.

Unfortunately, the weight of the snow caused a portion of my string lights to detatch from the pole which as evidenced in the follwing photo.

Hopefully once things melt, Juan V can stop by and reattach them.

...which had caused the lights to come down.

Once he fixed that, he added lights to my a portion of the branches of my kiwi vines (as seen on the lefthand side in the next picture).

*WIOB is the abbreviation for the title of my book series, Words In Our Beak where the stories are set in y rooftop garden.
Posted by The Last Leaf Gardener No comments:


We had a wet snowfall in NYC yesterday (December 9th 2020) and I was able to enjoy it by observing the reactions of a number of House sparrows visiting my garden during the occurance.
Read more »
Posted by The Last Leaf Gardener No comments: 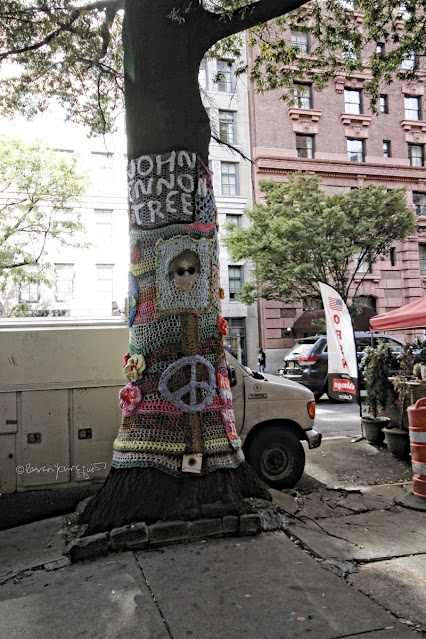 This evening will mark the fortieth anniversary of John Lennon being shot in front of The Dakota where he had one of his homes. That building is one block west and seven blocks south of the UWS street (79th) of where I saw this tree featured in the image directly atop this poting.
Read more »
Posted by The Last Leaf Gardener No comments:

I have only been able to take a couple of walks in my nearby parks since March (2020) because the coating on my lenses of my prescription lenses has worn off and replacing them is out of my financial reach at this time.
Unfortunately since the coating is damaged, my glassses steam up constantly when I wear  a face-mask and I can't see where I am going which is very frightening.
I have tried many "home remedies" to prevent the steaming but because the issue has to do with the coating, my battle is endless.
Moreover, due to the fact that I fell last January (which resulted in my  breaking my Greater tuberosity), I am feeling vulnerable when it comes to the prospect of falling, SOOOO... I have had to stay at home more than I would like to, and I miss the parks!
Therefore, my spirits were lifted the other day when I discovered that a lone male House finch was spening some of his time perching on the branches of Ailanthus trees in the courtyard (as evidenced in the imagess atop this posting).
Read more »
Posted by The Last Leaf Gardener No comments: