The Fourth Day of Christmas 2019

I'm honoring the holiday with the illustration posted above, which is one I featured in last year's Fourth Day of Christmas entry.

Within this entry I'm also honoring the holiday with four pictures of a calling bird known as a Taveta Golden Weaver (Ploceus Castaneiceps) one of the image is directly below.

I saw this bird type during my November visit to the Central Park Zoo, a visit which I discussed two weeks (December 14, 2019) here on Blogger.

The aforementioned entry features some of the other bird varieties (Black Swans, Pied Avocets, Scarlet Ibises, as well as a Victoria Crowned Pigeon and green parrots) whom I observed when I was at the zoo on that day.

I concluded this particular entry with a promise to discuss (within subsequent posts) facts about other bird varieties as well as other animal types who reside there.

I kept my promise and in yesterday's posting I featured a Red-crested cardinal whom I encountered during my November afternoon at the zoo.

Today I will tell you a couple of facts re the Taveta Golden Weaver, the avian creature I've just introduced whom I observed when at the zoo. 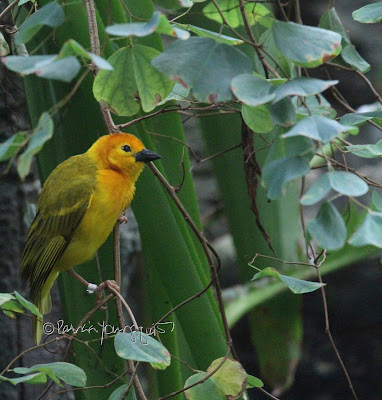 According to a variety of sources, including a web-page for The National Aviary, the male Golden Weaver is known to weave intricate nests, "using his beak to weave intricate ovoid nests, usually over water. Females pick a mate based on the male's skill at weaving."

This web-page concurs with others in listing the Golden Weaver 's status as being "Not Under Threat (Least Concern)."

It's good to learn that this bird type is not endangered, but, if they are a stable type, why confine them to a zoo —  unless the goal is to raise awareness about the importance of our rain forest. 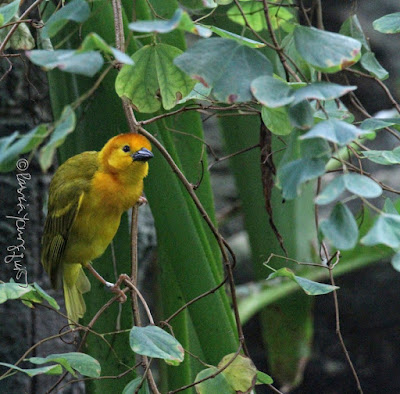 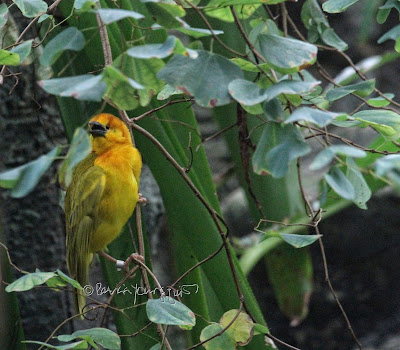 By the way, in the blog entry (12-14-2019) that I'm following up on, I admitted that upon my seeing certain bird varieties when I was at the zoo, I did think anyone having an opportunity to see them there would find the experience educational.

I conceded —  after watching Jane Goodall's insightful remarks about zoos (which can be found in a video clip included in that post — the experience of visiting a zoo could potentially raise awareness re needs of wildlife, the Rain Forest, and our environment.

On that note, I'll conclude by pointing you to my book series, Words In Our Beak, (pictured below).

Set in a rooftop urban garden (mine) in New York City, my story is told in the voice of Cam, a female cardinal, who visits it. The goal of these books is to open readers to a simple understanding of the winged world and their environment. They are directed to children and adults who are curious about birds, and want to learn about them from a unique perspective.

The book series includes facts and photographs regarding over twenty types of birds, including American Goldfinches; whom I'm thinking of as I write this posting, because part of their coloring is similar to the Golden Weaver, as evidenced in the next series of images which feature them in my rooftop garden as well as in Central Park (respectively).