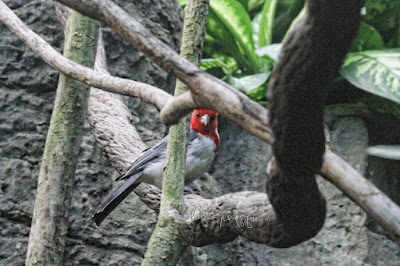 Nearly two weeks (December 14, 2019), I published a post here on Blogger featuring some of the bird varieties (Black Swans, Pied Avocets, Scarlet Ibises, as well as a Victoria Crowned Pigeon and green parrots) who can be found at the Central Park Zoo.

I concluded that entry with a promise to feature (within subsequent posts) facts about other bird varieties as well as other animal types who reside there.

Today I will tell you about one of those birds, the Red-crested cardinal who can be seen in the picture atop this entry.

This creature is also featured in the images directly below. 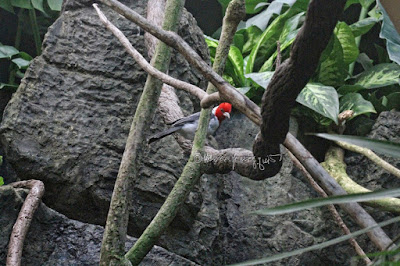 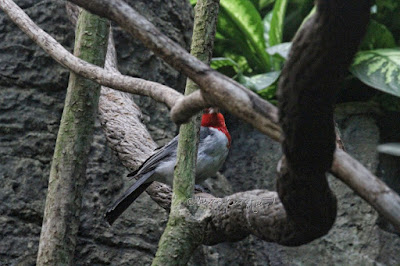 According to whatabird.com., Red-crested cardinals "are native to South America, but introduced to the Hawaiian Islands around 1930. In Hawaii, these birds prefer parks, lawns and dry thickets... within their South American range, they can be found in subtropical or tropical dry shrubland and degraded forests... They were  first released on the Island of Oahu in 1928. The Red-crested Cardinal is also known as the Brazilian Cardinal...Despite its name it is not closely related to birds in the Cardinal family."

A webpage for the Smithsonian National Zoo and Conservation Biology Institute states, "The red-crested cardinal is a medium-sized bird that resembles North America's northern cardinal in shape, but is mainly gray with only a brilliant red head, crest and breast. It is native to Argentina, Bolivia, Brazil, Paraguay and Uruguay, and is also a common sight in Hawaii and Puerto Rico, where it has been introduced...

Unlike Northern cardinals, males and females have similar plumage, with dark gray above on the back of their necks and their stomachs. The head, crest and upper breast are bright red. The red-crested cardinal has a silver-gray bill and dark legs...(they) live 3 to 6 years in the wild and about 13 years in human care."

It's good to learn that the Red-crested cardinal avian variety has a chance at a longer life under human care but is it a happier one?

In the blog entry that I'm following up on, I admitted that upon my seeing certain bird varieties  when I was at the zoo, I did think anyone having an opportunity to see them there would find the experience educational.

I conceded — after watching Jane Goodall's insightful remarks about zoos (which can be found in a video clip included in that post — the experience of visiting a zoo could potentially raise awareness re needs of wildlife, the Rain Forest, and our environment.

However, in spite of hearing Goodall's wisdom about these facilities, I felt divided (and still do) re how animals might feel when confined to a zoo.

For me, this is especially true when it comes to the Red-crested cardinal variety because (according to a number of sources including Cornell) "it is estimated to be stable from lack of evidence of decline or substantial threat."

If they are a stable type, then why confine them to a zoo, unless the goal is to raise awareness about the importance of our rain forest or  give them a few more years of life.

On that note, I'll conclude by pointing you to my book series, Words In Our Beak, (pictured below) that feature stories told from the perspective of Cam, a female Northern cardinal — even though her variety is not closely related to the Red-crested cardinal and at some point I will tell you about other birds and animals living in Central Park's zoo.