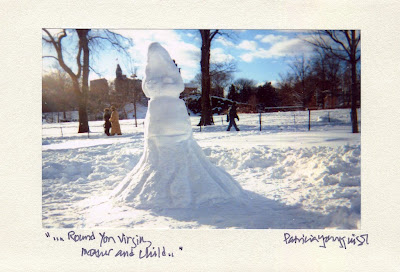 Happy New Year to you and welcome to my blog, The Last Leaf Gardener. Since tomorrow is the start of not just a new year, but a new decade, I find that I look back to how the decade began. The year 2000 began with all the Y2K frenzy. The following year 2001, came in much more peacefully, as evidenced in the photo above of a snow sculpture of the Madonna with Child, which I saw in Central Park on 01-01-00, after a winter snow storm.

Unfortunately, that peacefulness would ultimately be shattered within nine months and eleven days, on September 11th, 2001 when airplanes flew into the World Trade Center, murdering thousands of people.

Today as I return to this peaceful image snow sculpture image, I'm reminded of the freedom to create. Snow sculptures that often pepper Central Park after a snow storm are one result of that freedom. I imagine the snow sculptures bring joy to those who create them, and joy to those who, like myself, see them when they walk in the "winter wonderland" of Central Park. However, since snow melts, these are fleeting moments.
Read more »
Posted by The Last Leaf Gardener No comments: