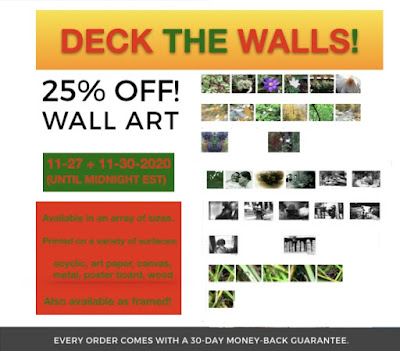 For today, November 27th and this coming Monday, Fine Art America (AKA FAA) is offering 25% of all wall art and that discount includes work created by yours truly.

Most of my selections can be seen in thumbnail format on my "poster" atop this entry.

Admittedly, the thumbnails are too small to decipher but the images can be viewed in larger formats on FAA.

The following image a few thumbnails from my Holiday collection.

This next image features thumbnails of my Mandarin duck collection.

FAA has the ability to render my images on a range of sizes for wall art and they can print my works on an array of surfaces (including arcylic, art paper, canvas, metal, poster paper as well as wood). Moreover, they can frame the art work if need be.

So why not deck your walls with art or give it as a gift, which will surely be appreciated since people will need to stay at home due to the coronavirus pandemic surging. 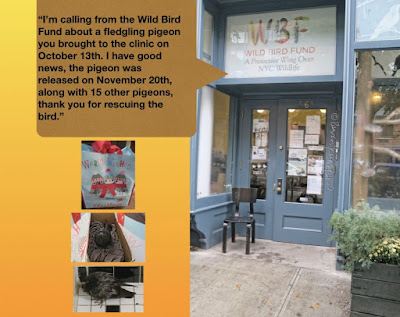 A little over one month ago (on 10-13-2020), with help of a colleague, I rescued a pigeon (now named Tam) who was in my garden on the UWS of NYC; and took him to The Wildbird Fund (AKA WBF), NYC's wonderful and only bird rehab center.
I subsequently posted detailed info about this scenario in an entry here on Blogger at that time. The collage directly above gives a pictotial overview of the pigeon's ultimate survival, which  I just learned about yesterday (11-23-2020) and  which I'm now offering as my content for this 199th episode of my Tuesday's Truths series.
I am most grateful to the WBF and as you may know, this bird rehab place, along with pigeons are just a couple of topics pigeons are included in my three volume book series, Words In Our Beak.

Thank you dear reader, for holding good thoughts re this rescued pigeon's demise and stay tuned to see if I happen to encounter him again.

Special Time-Sensitive Offer from Fine Art America re my Images 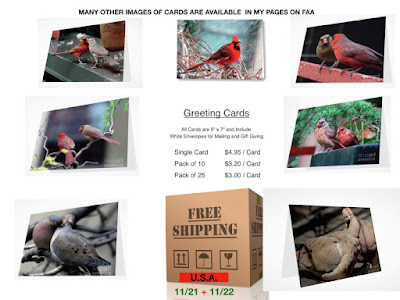 Fine Art America, AKA FAA (the place that does my fulfillment for my art "merchandise"), offer for free shipping ends tonight, November 22nd at midnight EST.

I have several varieties of greeting cards and a fraction of them can be seen within the images included in my poster which is atop this entry.

Some of my other greeting cards can be seen within the folllowing sequence of photos:
Read more »
Posted by The Last Leaf Gardener No comments:

Some of my photo-art is now availabe in jigsaw puzzle format! 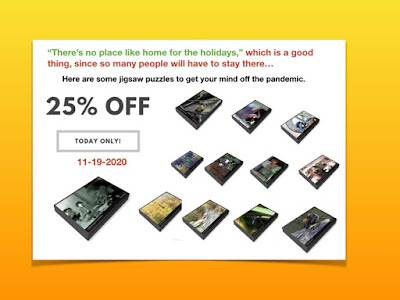 One week ago today (11-12-2020), I announced on FB that Fine Art America (FAA) an online, print–on–demand art marketplace and fulfillment service company (who helps artists, like me, sell their images as wall art, home decor, apparel, and other lifestyle products), now have the ability to render artwork in frameable jigsaw puzzle format.

All of their packaging can be seen within my "poster" atop this entry.

Admittedly, the thumbnails may be hard to decipher, so I'm taking the liberty to show you larger images of my jigsaw puzzle's boxes.
Read more »
Posted by The Last Leaf Gardener No comments:

"There's no place like home for the holiays...," which is a good thing, because due to COVID19 many people will stay in their living quaters, so make them cozy! 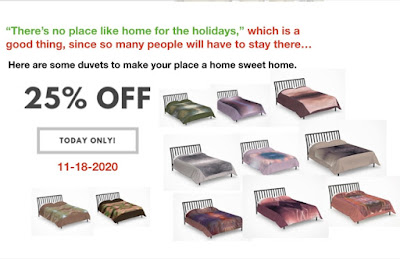 I have been away from Blogger for a week due to technical dificuilties with my computer and hope my absence has not caused my readers any inconvenience.
But I'm back for now and hopefully longer, if all is resolved with my Mac's system.
At this time. I am grateful to annouce (albeit very last minute) Fine Art America (FAA) is offferig a one day discount (until midnight EST tonight, 11-18-2020) on my kaleidoscopic photographs which are printed on items for home decor, such as duvet covers as seen in the thumbnails affixed on the image of the poster atop this entry.
Read more »
Posted by The Last Leaf Gardener No comments:


Ten years ago, on Veterans Day, November  11, 2010, Colleen Elizabeth Ormond (pictured here with the family dog, Hero), died at the age of twenty-five. I learned of her death late that night, not even a week after publishing a blog post about November being a month of remembrance for those who have died, and for those who mourn them.

Colleen was born with with a severe form of a hydrocephalic condition which caused her to have several debilitating afflictions, including being unable to see due to resulting damage to her optic nerve.

Yet Colleen Elizabeth Ormond gave much love from the minute she came into the world until she left it, passing peacefully in her sleep on Veterans Day, having been a warrior herself.

Colleen had fought the good fight and has now finished the race.

At that time, the family did request that in lieu of flowers to honor Colleen, donations could be made to Katibug, a non-profit foundation helping families who are caring for medically and physically fragile children like Colleen, in their homes.

Colleen's passing (and the fact that her parents and sister cared for her in their home) has always been part of my inspiration to follow through n my book project Imperfect Strangers.

The book discusses growing up with the condition of NF (Neurofibromatosis) and I've posted a video re my endeavor which can be viewed within my Vimeo channel as well as my You Tube channel.

The goal of my ptroject is to not only raise awareness about NF, but to educate the general public about consequences re how remarks made to an individual with any physical (or mental) difference can have a profound, long-lasting impact that last a lifetime.

Email ThisBlogThis!Share to TwitterShare to FacebookShare to Pinterest
Labels: My Articles

A Lesson to Learn From Birds

I had two non-social distancing birds (a House sparrow and an American robin) stop by my garden the other day which surprised me as I have always heard these types of birds did not get along, so I did some research posing the question, "Do robins and sparrows get along?"

Here is what I found out: from a variety of sources. Despite their differences, sparrows and robins manage to get along pretty well. They can hang out in the same tree, they can even sit on the same branch, but the unwritten rule is to stay out of each others nest.

Not a bad thing for us humans to do during these tumultuous times of the cornavirus pandmeic and unrest due to issues associated with our 2020 preidential election in the United States.

On anothern note, dear reader, both of these bird types are featured in my three volume book series, Words In Our Beak.

More Stores Board Up for Election Day