Mother Theresa and the Intrepid 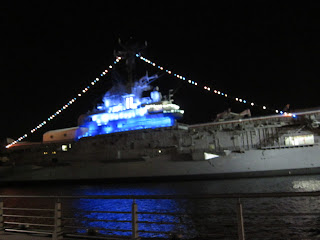 The folks that manage the Empire State Building in New York City, refuse to honor Mother Theresa's one-hundredth birthday, by lighting the top of the Empire State Building in her signature colors, even though they light the tip of the building for all sorts of occasions. In light of the Empire's State Building's non-lighting, the USS Intrepid , has decided to let their lights shine in her honor, as evident in a photograph (which is posted above this entry) taken by yours truly whilst I was at the Intrepid's dock along the Hudson River in New York City. You may read about the Intrepid's "stepping up" to amend this lighting controversy by clicking on the following link.

Meanwhile, with or without the lighting up of special attractions, Mother Theresa's light will always shine. And so without further ado: 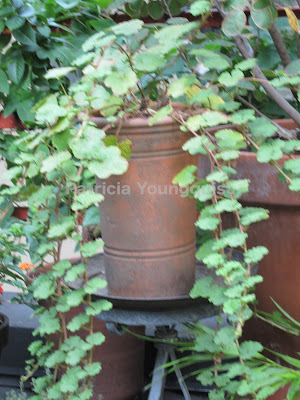 The Rubus calycinoides (Ornamental Raspberry or Crinkled Creeper) is a strikingly beautiful and elegant plant with cascading evergreen, which produces a mass of richly textured greens.

Some garden experts advise to plant it in masses to form a dense ground-cover. I prefer to show off its beauty by having it as a 'single' and planting it in an attractive clay pot. Folks even use it as a lawn substitute, but I like its 'diva' quality so I let it stand alone. 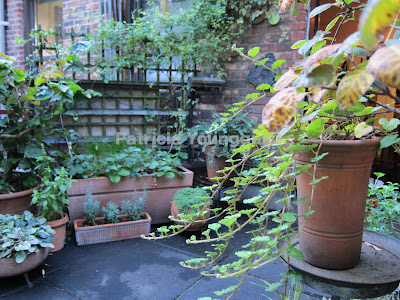 It is often confused with what could be its twin, Rubus pentalobus. The branches of both plants look lovely in cut flower arrangements. I do not own a Rubus pentalobus, but it has such a fun name to say ROO-bus- pen-tah-low-bus that I couldn't resist including a reference to it in this post. ROO-bus-pen-tah-low-bus. 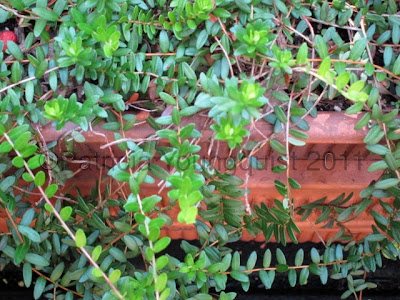 My Vaccinun macrocarpn (Cranberry Vine), a perennial, adds nice texture to my urban garden. It also bears fruit, little white cranberries which supposedly have a "slightly apple-like taste" according to the grower. I have not indulged in the taste treat, but I can assure you the vine itself is a treat — very "eye-candy" as the saying goes — to behold.
Posted by The Last Leaf Gardener No comments:

Email ThisBlogThis!Share to TwitterShare to FacebookShare to Pinterest
Labels: Cranberry Vine, My Rooftop Garden, Plants in Culinary Use 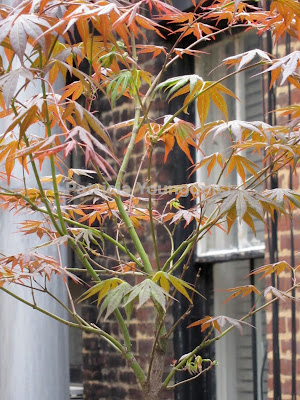 I think that I shall never see,
A poem lovely as a tree.
A tree whose hungry mouth is prest
Against the earth's sweet flowing breast;
A tree that looks at God all day,
And lifts her leafy arms to pray:
A tree that may in summer wear
A nest of robins in her hair:
Upon whose bosom snow has lain;
Who intimately lives with rain.
Poems are made by fools like me,
But only God can make a tree.


Yes, I have used this poem in a previous post , but that was a different season and a different tree.This tree, my Acer palmatum var. dissectum 'Tamukeyama' is a red-leaf cultivator, which grows in my urban (NYC) rooftop garden.
Posted by The Last Leaf Gardener No comments: