Thirty days hath September, and by the end of this day, the month of September will have ended for 2013. It has passed slowly for me on a certain level for I have spent the month recovering from an accident I had one month and one day ago on August 29th 2013.

Additionally, I was knocked out of commission by a nasty virus/cold for nearly twelve days beginning on September 15th 2013 (two days after my last posting here on Blogger) until this past Tuesday, September 24th when Juan V came to work in my garden and ultimately took the image atop today's entry.

Honoring & Remembering the Service of Others Heartfelt Thanks to Ms. Susan Grimstead of WBU-NJ (as well as Sarah, D. William, Robert and Chris) 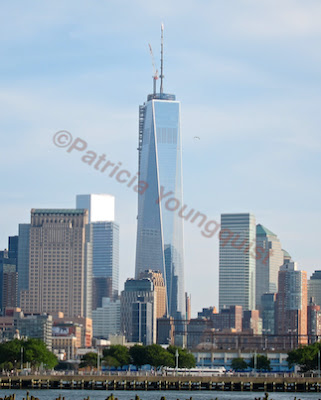 This past Wednesday was the twelfth anniversary of the 9-11-11 attacks and in bygone years I have dedicated blog posts (including ones here on Blogger) to those who lost lives in the attacks as well as to those who mourn losses as a result of that tragedy.

This year I acknowledged the anniversary on TLLG's FB Page as well as in an entry on hometalk. Both of the aforementioned posts included the photograph atop today's blogger entry. The image is of One World Trade Center (formerly known as The Freedom Tower), and it was taken by yours truly from a vantage point on the greenway along Manhattan's westside, slightly north of the Christopher Street entrance.

It is hard for me to believe that so much time has passed since that horrific day, but indeed time has passed and the construction taking place at the WTC site (including the building of One World Trade Center) is a physical indication of this fact.

During this year's 9-11-01 coverage, I heard the tail-end of a radio interview where the guests on the program were two brothers, who had lost someone in the attacks, and who were focusing their energy on efforts to promote the idea of September Eleventh being dedicated as a day to SERVE OTHERS, in memory of those both living and deceased, who served (by giving of their time and talents) to others on that fateful day and in the aftermath.

The position of these brothers is that while we still mourn the dead, and while we still feel for those who now have illnesses related to 9-11, a road to true healing is to also focus on how folks came together to help others in their time of need.

One of the examples they cited was that of a man who came to NYC from Michigan — on a bus — to honor this year's 9-11 by helping folks (who were strangers to him) rebuild their homes (in Staten Island) which had been damaged as a result of a hurricane named Super Storm Sandy.

During the interview it was also brought up how service to others should not be limited to a one day dedication, nor does "service" need to always be in the form of a large gesture. Small gestures of service are essential too; and it is important to offer them as well as to honor them.

In my lifetime, I have been blessed by my interactions with a number of folks, and in today's entry, I'd like to acknowledge how my recent encounters with others have helped me to resolve (hopefully) an issue I am having feeding birds in my urban (NYC) garden; hence, my title for today's post: Heartfelt Thanks to Ms. Susan Grimstead of WBU-NJ (as well as Sarah, D. William, Robert and Chris).