I would like to take a moment to comment on the color photo work that I have done where I have used pinhole cameras to create photographic prints with kaleidoscopic patterns, These works are mysterious, seductive, and liberating. The intricate designs give the viewer permission to feel emotions. The mood created by these is meditative. A whisper, not a shout. The delicate patterns in this series of photographic prints add tranquility to meditation and yoga centers. They create a sense of calmness in public spaces. They enhance Pilates studios. And they add ambiance to your summer home in the Hamptons - the one where your study overlooks the Atlantic. They are inspiring; as seen in the rendition of  Sunset in Riverside Park, which is posted below: 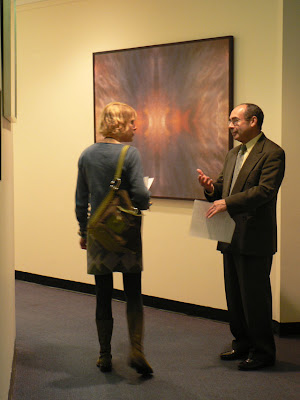 On my web-site, Sunset in Riverside Park, can be seen with other kaleidoscopic prints.The photograph above was taken at my one woman exhibition that took place in the Art Gallery of the Manhattan Borough President's office. This exhibition took place a few years after my interview with John Montone (see posting of January 6th 2010) and is the print we discussed in that interview.

Having said (in a last week's post) that I don't like to give many details about my art-work in order to enhance the experience of the viewer, there are always exceptions such as when very specific and poignant details may pay homage to its content. For me, one of those occasions to offer details is with my print, Jennifer and Felix seen below: 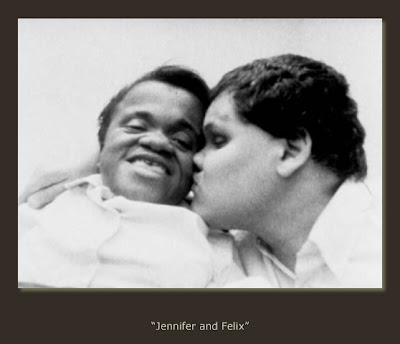 I met Jennifer Maloney when I was a student at Hunter College in the 1990s. Jennifer was born in 1971 with Osteogenesis imperfect.

My being a photo-artist is very surprising to some, given the limitations of my eye-sight, so, I'm using this posting on my blog as an opportunity to offer some information about how I've adapted cameras and darkroom equipment to create some of the images that are posted on my web-site and to offer some of my perspective on photography.


My first formal endeavor as a photo-artist was a number of years ago when I pursued many aspects of Black and White photography. Much of the back story on these efforts can be heard in the interview with Karen Ingenthron Lewis that I spoke about in my January 6th posting, where I mentioned that it can be heard on my web-site.

Since Karen singled out certain photographic works of mine (prints and greeting cards that are on my web-site), to discuss for interview purposes, and you can hear about them on the link posted on this blog or go to my web-site and download it, I will blog here about a few of the images she did not cover. I must confess that I do not like to talk about how I've created a print or why the composition has been rendered in a certain way in a given print. I feel too much information spoils the magic of not knowing. I think having knowledge of many specific details of a given work of art can interfere with the relationship a viewer has with the art work. Consider the photo posted below: 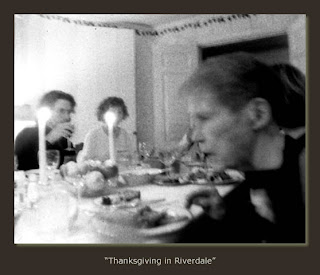 We know there is an elderly woman seated at a table. Is it for dinner? Brunch?

We can assume it is probably not breakfast; because candles have been lit, and on the opposite side of the candles someone is drinking what appears to be wine from a goblet (though you can have wine at breakfast or you can drink juice from a goblet and perhaps the candles are lit because the electricity has gone out).

We know it is probably in someone's home because of the detail near the ceiling, but it could be taking place at a restaurant made to look like a home.

We don't know anything for certain, and by not knowing, we can create our own story — until we notice the title of the image - which viewers often use to search for a clue.

Because this image was being considered for publication, the jurors of the competition insisted that I give it a title. I ultimately received the honor (hopefully for the print, not the title).

"America's Answer to Guy de Maupassant:"The Inspiration Behind the Title of My Blog, The Last Leaf Gardener (TLLG) 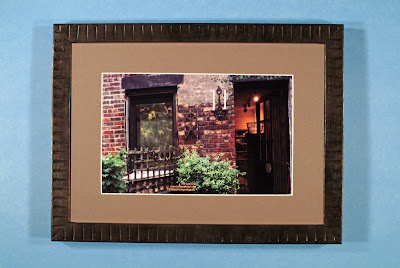 With this post which will mark the first post of my from now on weekly postings (with the exception of the dates I stated in my first post (and an occasional post in between on certain Saturdays if a special event occurs), I’d like to take a moment to tell you about the title of my blog, The Last Leaf Gardener (TLLG)– and the name of the image posted above, a framed card from a collection created by me.

This collection can be seen on my web-site. The title of the framed piece posted above, and of this blog, is a modification of the title of a short story, known as The Last Leaf, by O. Henry. O. Henry!

Both of these authors were “known for their twist endings,” and in his story, The Last Leaf, O.Henry tells us that Johanna (Johnnsy, the protagonist) has renewed energy upon seeing a lone ivy leaf clinging to its stem against a wall. If you’ve read this story, you are aware that unbeknown to Johnsy, what she is actually seeing is a wall on which a single ivy leaf has been painted by her disgruntled super, who knows that when Johnsy sees the leaf, she will find the strength to carry on with her life. Coincidentally, on the wall of my roof–top extension garden, someone (prior to my moving in) has painted many leaves of ivy.

A number of years ago, this “ivy” was bought to my attention by a neighbor, who happens to be named Johanna. She came to visit me when she learned my ceiling had collapsed into my top floor studio apartment where the main living space measures fifteen feet and four inches by ten feet. 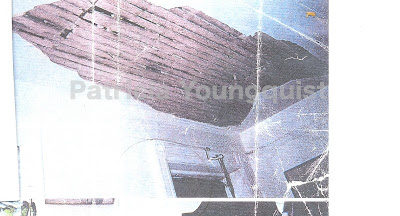 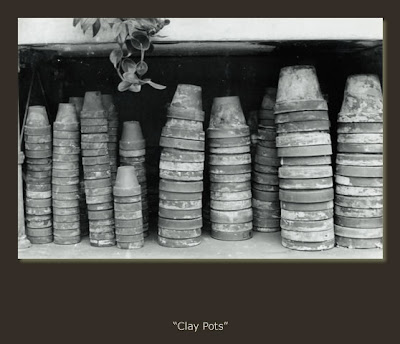 I have always appreciated gardens as well as the containers that provide a home for plants, and the image posted above this entry is one I created after happening upon an abandoned greenhouse. By "demand", I have rendered this image into a limited edition of prints which are available in varying sizes. Information relating to this image (as well as other black and white photographs that I have created) can be found in the print collection pages on my web-site. This image is also available as a note-card.

Fortunately, I don't have to worry about being without access to a greenhouse, because at my upper-west side apartment in New York City, I've planted and maintained a lovely terrace garden that is now caked in snow, and with this final "clarification" post, I'd like to tell you a little bit of background about my gardening endeavors.
Read more »
Posted by The Last Leaf Gardener 2 comments:

This post is about the impact of my being legally blind, the impact this condition has on my photo-artistry, and to offer a follow-up to the two radio interviews that I've given on this subject. These interviews are posted on my web-site.


One interview is with Karen Ingenthron Lewis. She conducted this interview for W.B.A.I. Radio (a prominent FM station in New York City) for the program, The Al Lewis Show. Al Lewis was known for his role as Grandpa in the television series, The Munsters. The other interview is with John Montone. He conducted this interview for 1010 W.I.N.S. (a prominent AM station in New York City) for his news feature, John Montone's New York, where he posed the question (regarding legal blindness and photo-artistry), "It takes a sharp eye...or does it?"

In addition to my being born with NF (discussed in the second post), I came into the world with a severe form of myopia. The latter was complicated by my having a long eye-ball and a stretched retina, causing me to have extremely low vision. The prevailing attitudes about women who wore glasses during the year that I was born most likely shaped my mother's attitude about my wearing glasses. Her opinion also formed my view of having to wear them during childhood, which in retrospect, contributed to my artistic temperament.

"Tis true my form is something odd..." 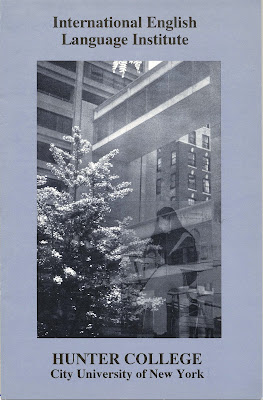 I often hesitate to admit that I have Neurofibromatosis-Type-One (NF-1) because people's attitudes towards me having it have caused great emotional pain that has often been harder to live with than any pain caused by a neurofibroma. Meanwhile, it is important for me to mention the condition because not only has it shaped my art-work, but I owe the community of those diagnosed with NF-1 as well as NF-2, any awareness that can be raised. Joseph Merrick, the man associated with Elephant Man's Disease (often confused with NF) used to sign his letters with this poem by Isaac Watts:

"Tis true my form is something odd,
But blaming me is blaming God.
Could I create myself anew,
I would not fail in pleasing you.
If I could reach from pole to pole,
Or grasp the ocean with a span,
it would be measured by the soul,
The mind's the standard of the man."

Admittedly, my case of NF is nothing, nothing, nothing compared to Mr. Merrick's, but the emotional pain, brought on by my reaction to other people's remarks, has evoked a very similar response, especially as a child.