Remembering Peggy Wood: “Progress is being made.” 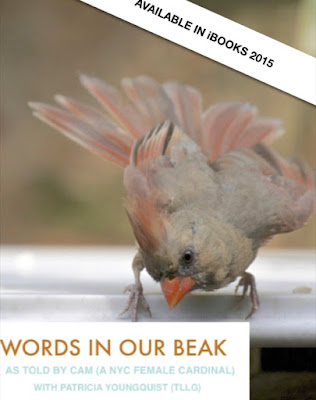 Today, May the 8th, I might have been getting together with the celebrate the birthday of  my dearly departed editor, Peggy Wood, had she not passed away on the last day of December of 2014. Peggy was the editor of the very first version of Words In Our Beak Volume One, which was an iBook digital version (photo of the cover is featured in the image atop this entry). It was released after she died.
In any event in the next image, she can be seen in editing-mode. 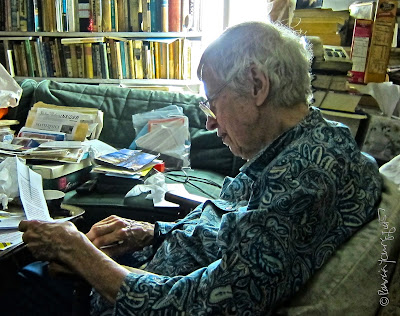 The folowing photo features her making a birthday wish at a small gathering I had for her in my garden. 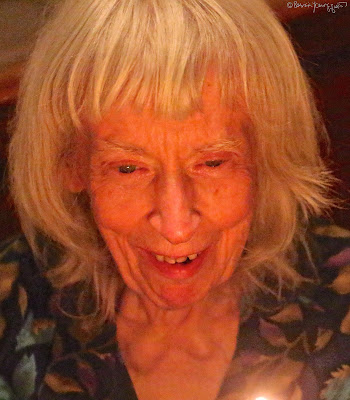 Directly below is a photo-op of her with her brother, her sister-in-law and yours truly eating at her favorite restaurant, Bello Giardino. 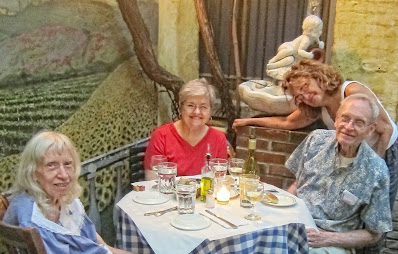 That place is now known as Polpette and has the same owner. Peggy's death on the last day of 2014 was one of many difficulties that had occurred during that year, for a few weeks prior on 12-1-2024, my friend, Helen died.

Additionally, a few months prior to Helen's death, I had a very serious eye operation on my right eye with a difficult recovery.

Moreover, and saddest of all for me, the pastor of our parish  left in the spring of 2014 which was the onset of an illness for my dearest friend. The consequences of it forced him to move out of state and his absence continues to be a big loss for me.

2015 was a continuation of one-after-another circumstances: another dear friend (DD) was diagnosed with stage four cancer and died five-six months later; I had an operation on my left eye and a separate procedure to have a tumor removed.

Plus the years of 2016 to this present moment have been filled with circumstances related to my four eye conditions as well as my Neurofibromatosis (NF); these were most recently exasperated by a major dental procedure and of course the consequences of the coronavirus pandemic.

Having said all of this, I am most grateful (understatement) to say, in spite of these hardships, the iBook digital version of “Words In Our Beak"went on to become a three volume hard-cover series also titled Words In Our Beak and published by Ingram Spark.

These books are directed to children and adults who are curious about birds (as well as gardening) and who want to learn about these topics from a unique perspective. The narrator of the stories in my books is a female cardinal named Cam.

And images from my books (as well as from other venues) can be rendered by FAA (AKA Fine Art America) on to an array of surfaces for wall-art as well as on to items for personal use (including totes, face-masks, note-cards and jigsaw puzzles).

In terms of my NF, I am continuing to seek representation for my book that shows the consequences of living with NF. I've posted a video re my endeavor which can be viewed within my Vimeo channel as well as my You Tube channel.
In remembrance of Peggy Wood, one of her favorite expressions was,“Progress is being made.” I certainly think of those words as I forge ahead and am grateful to still be in contact with her out-of-state brother and sister-in-law.
Posted by The Last Leaf Gardener