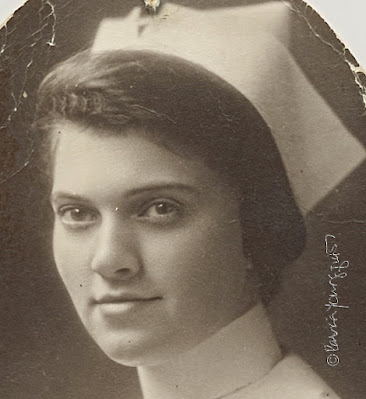 On this day in 1974, "New Mexico nurses initiated a resolution in 1981 to have May 6th declared National Recognition Day for Nurses. The American Nurses Association (ANA) Board of Directors took up the banner and promoted the proposal. In 1982, the United States Congress designated May 6th to be National Recognition Day for Nurses and President Ronald Reagan signed the proposal."

My maternal grandmother, Clara Fitchie Melahn, seen in the photo (atop this entry) taken when she was a young woman, was 74 years of age at the time Regan signed the proposal. She had been long retired from nursing as she had left her career when she had children.

My grandmother had quite an influence on me, but the only experience I had being a nurse is when I played one (in the 1980's) on a soap opera, "One Life to Live.
A copy a Polaroid photo-op of me in costume is posted directly below. 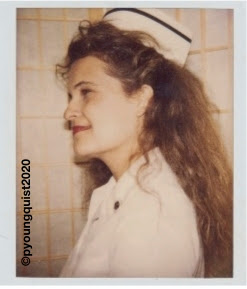 Grandma's influence on me has to do with my being a writer. My grandmother's last words to me, which I heard from a phone booth that was in the lobby of The Brandon, a rooming house (seen in the following vintage postcard image) on the UWS, were, "You should get back to your writing." 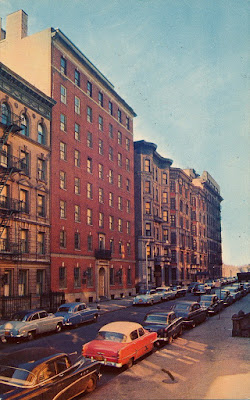 I ultimately heeded her advice. For as many of you may know, I have had my three volume hardcover book series, Words In Our Beak published by Ingram Spark.

These books are directed to children and adults who are curious about birds (as well as gardening) and who want to learn about these topics from a unique perspective. The narrator of the stories in my books is a female cardinal named Cam and her name is in honor of my maternal grandparents.

The "C" in Cam's name is for my grandmother, Clara.

The "a" in Cam's name is for my maternal grandfather, Albert.

And the "m" in Cam's name is for their surname, Melahn.

My other book length piece, Imperfect Strangers, features my grandmother in a few chapters. At the moment, I don't know the status of where it stands with a literary agent.

In any event, Imperfect Strangers, discusses growing up with the condition of NF (Neurofibromatosis). I've posted a video re my endeavor which can be viewed within my Vimeo channel as well as my You Tube channel.