The Ninth Day of Christmas and other Stuff


Happy Ninth Day of Christmas, dear reader! This is the day when someones's true love gave to them (according to a song) nine drummers drumming; as well as eight maids a milking, seven swans a swimming, six geese a laying, five golden rings, four calling birds, three French hens, two turtle doves and a partridge in a pear tree. In honor of the day, I've posted a picture (by the illustrator Roberta Baird) of a bird known as a drummer atop this entry.

According to a web-page (12 Birds of Christmas), "with this verse, the order of the gifts we sing is changed from the original. Instead of ladies dancing, in the earliest known version, on this day drummers were drumming. In England and mainland Europe, the most common drumming bird was the Snipe. Where and when snipes do their drumming is important. Snipes drum in the spring soon after fields have been plowed and are most fertile, and until the mid-18th Century when the new year began. The number nine represents harmony and eternity. Fertility coupled with both harmony and eternity creates the most powerful force we can know."

By the way since this Ninth Day of Christmas is falling on a Wednesday, the day designated in social media as Wednesday's Wisdom I have a bit to offer but it has nothing to do with drummers drumming or any other bird for that matter.

This past Saturday when I was walking in Central Park I came upon a squirrel enjoying nourishment from the pod of a Honey Locust tree, as evidenced in the image below. 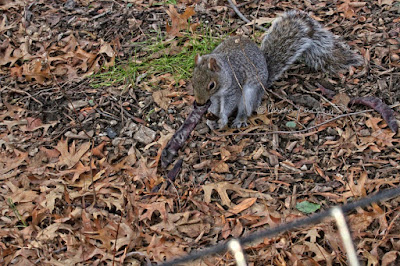 According to a web-page, "honey locusts are part of the bean family, Fabaceae. As such, they produce long seed pods full of bean-like seeds. The pods contains a sweet pulp that makes them a favorite food (of wild life)..."

From the looks of how this squirrel is eating the pod in the images below, I'd say it's a safe bet that this creature would be a good harmonica player! 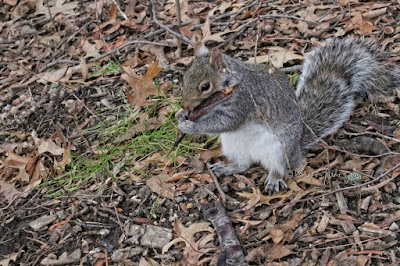 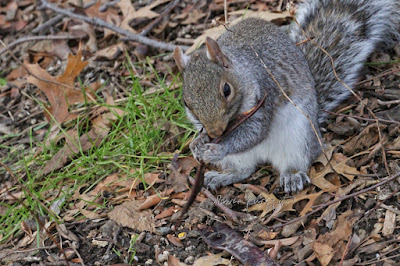 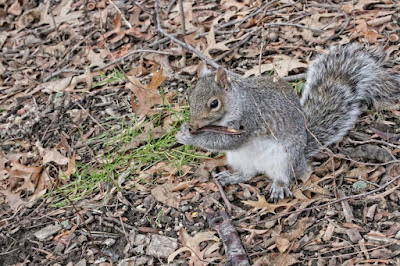 Another squirrel busied him/herself by doing some people-ing from another tree top.

People-ing as you may recall is a term that is coined by Cam in volume one of her book series, Words In Our Beak.*


She explains that people-ing is term birds use when they are in the act of observing humans. Probably  the squirrel seen in the pictures below might use that same term as he/she looked down on passers by. 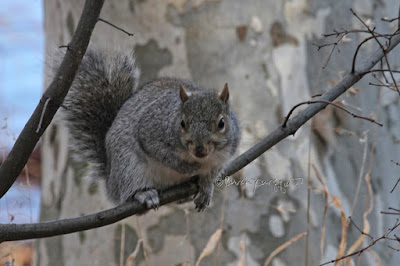 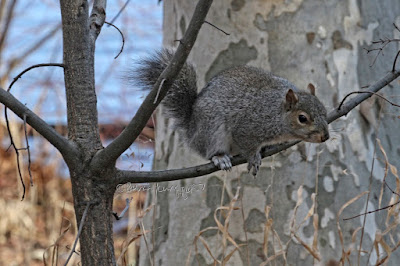 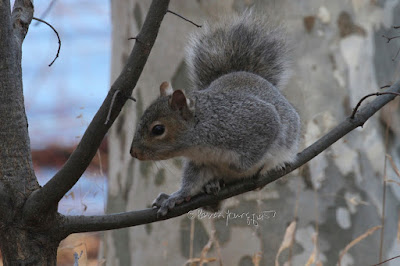 If you look closely at these pictures, you will notice that this creature's tail has been damaged, which is a shame because, "the squirrel’s tail is unique to it and beautifies it to a great length. The purpose of the fluffy appendage is actually more than its physical aesthetic looks. It is adopted for many uses and serves the animal in more functions than one would ordinarily think. The tail is the most attractive and conspicuous part of the squirrel’s body for an onlooker, but for the animal itself, it is almost a universal tool (more info @ https://bit.ly/2CJyCkj)."

I hope you enjoy seeing these squirrels as I did, dear reader, and I also hope that in these remaining Twelve Days of Christmas, you will purchase copies of Words In Our Beak, which they are sure to enjoy even more than the "traditional" gifts for this time period. Here's the purchase info for the books:

EACH OF THESE BOOKS CAN BE ORDERED FROM ANY PLACE SELLING BOOKS BY GIVING THEM THE TITLE, OR ISBN, OR MY NAME, PATRICIA YOUNGQUIST.
Addendum:
It seems the caption on Ms. Baird's illustration may be wrong. A number of resources discussing "The Twelve Days of Christmas," state that on the Twelfth Day of Christmas, someone gave their true drummers drumming (twelve of them) along with other gifts. It was on the eleventh day that the gift of piper's piping was given (eleven of them) along with other gifts.