Daffodils: A contendor for NYC's flower + an inspiration to poets (Tuesday's Truths WK 211)

Welcome to my 211th segement of Tuesday's Truths, where I'm pointing out that evidently Michael Bloomberg, when he was mayor of NYC, wanted to designate daffodils, the flower type featured in the image directly above (which was taken in Central Park) to be our city's flower (the state flower is the rose).

According to a 2018 New York Times article, "...Mayor Michael R. Bloomberg named the city flower the daffodil, widely used to commemorate the victims of the Sept. 11 attacks. Before that, there were official borough flowers — the tulip and rose for Queens, the pinkster azalea for Staten Island, the yellow forsythia for Brooklyn and the day lily for the Bronx. Manhattan did not have one."

The daffodil has also been the inspration for poets, including William Wordsworth, who pennned, I Wandered Lonely as a Cloud.

I wandered lonely as a cloud

That floats on high o'er vales and hills,

When all at once I saw a crowd,

A host, of golden daffodils;

Beside the lake, beneath the trees,

Fluttering and dancing in the breeze.

Continuous as the stars that shine

And twinkle on the milky way,

They stretched in never-ending line

Along the margin of a bay:

Ten thousand saw I at a glance,

Tossing their heads in sprightly dance.

The waves beside them danced; but they

Out-did the sparkling waves in glee:

A poet could not but be gay,

In such a jocund company:

What wealth the show to me had brought:

For oft, when on my couch I lie

In vacant or in pensive mood,

They flash upon that inward eye

Which is the bliss of solitude;

And then my heart with pleasure fills,

And dances with the daffodils.

Another poet, Emily Dickinson, did not feel the same as Bloomberg or Wordsworth, upon seeing the presence of daffodils.

A stanza from her poem, I dreaded that first Robin, so, (posted below) is evidence of the fact that not everyone is comforted by flowers.

I dared not meet the Daffodils—

For fear their Yellow Gown

Would pierce me with a fashion

So foreign to my own—

My circumstances have remained tough for so long, and confess I was not aware of how fortunate I am that small details bring me such joy, and that no matter how downtrodden I may feel, I continue to "dare" to "meet the daffodils..." which I did again a few days ago in Central Park where I took the photographs of daffodils that are included in the image atop this entry as well as in the next sequence. 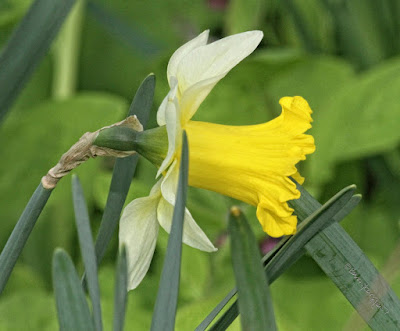 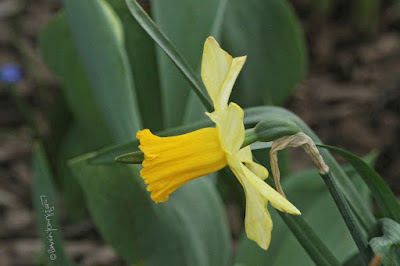 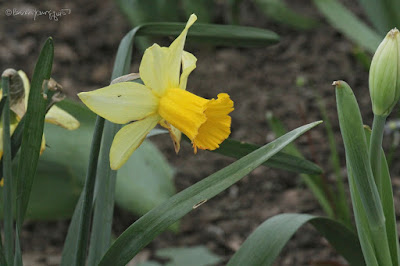