Ed O'Neill Has the Worst Celebrity Recognition Skills Ever? (If so, I'm a close second) 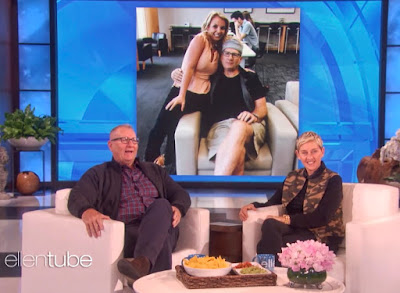 The photo atop this entry features a screen-shot from the You Tube video posted directly below.
In the video Ed O'Neill is on the Ellen DeGeneres show where she "acuses" him of having the "worst celebrity recognition skills ever,"
Apparently he earned the bragging rights for having the "worst celebrity recognition skills ever," upon being in a waiting room at an airport when he wass approached by Britney Spears, who wanted her picture taken with him. He, asuming she was just a young fan, agreed, but after Spear's photo-op (seen within the image atop the entry) went viral is when O'Neill learned the identity of the airport fan.
I am not sure if he qualifies for having the worst celebrity recognition skills ever," for I have had chance encounters with celebrities and did not realize who they were in spite of interactinting with them for several minutes as was the case with the late newscaster, Peter Jennings.
Our exchange went like this:
On my way home from work [when I taught at Hunter College], as I headed up the street — lugging my very big bag of sheetrock and papers to grade — a man came from out of nowhere, approached me and said, "I hope you aren't taking your work home with you! That bag looks heavy. Let me carry it for you since I'm heading in your direction."
As we headed up the street, I said to him, "Since you asked me if I was coming home from work, are you also coming home from work?"
He said yes, he was on his way home from work, and when I asked him where that was, he told me that he worked for World News Tonight. I mentioned that my ex-boyfreind also worked on that show and wondered aloud if he'd known David.
This stranger said that he did know David, and at that juncture of our walk,  he pointed to a building and said, "I live there, but your bag is heavy, so  I'll walk you home."
When we got to the building where I live, the man leaned down and put his face very close to mine, and grimaced, "Would you like me to say hello to David for you?"
Almost immediately after the man left, I realized that I had been engaging in conversation with the famed newscaster, Peter Jennings (seen in the next photo from the web) who at the time was the host of ABC's World News Tonight. 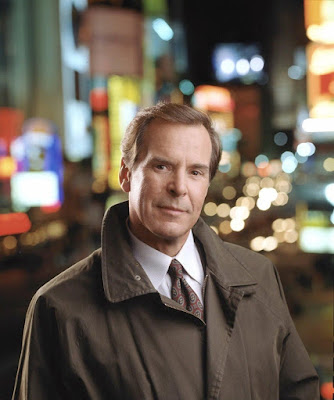 Besides the fact that I hadn't owned a television for years (by choice), and besides the fact that my vision was even more compromised from the sheetrock dust, I never would've recognized the man, for I was in my own world news that night.
In any event, rather I am a contendor for competition with Ed O'Neill when it comes to not recognizing celebrities, I have a different association with him, which is I worked with him many years ago on a TV pilot, Popeye Doyle which is based on The French Connection (movie).
He played Detective Popeye Doyle and I was his silent undercover partner, disguised as a bag lady. The pilot was filmed in 1986, well before Ed earned fame from many other shows, including Married With Children.
Days after we filmed our scene, I happened to see him and he said, "Everything we did is in that clip...this could be good for you and me."
The pilot never took off nor did my acting career but his certainly did!
In any event the link posted here (https://bit.ly/2P1kwDB) is to the place in the TV show where my scene with him takes place.
My truly lovely friend, CF has informed me the scene I'm referring to starts at the 58th minute — the moment a yellow checker cab pulls up to curb. A screenshot of this scene is posted below. 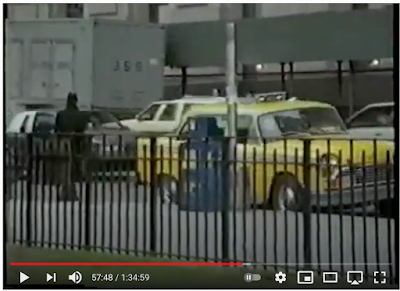 My truly lovely friend, CF has informed me the scene I'm referring to starts "at the 58th minute" (in theaforementione link) which is the moment a yellow checker cab pulls up to curb... I'm not sure of where it ends, but it goes on for a while... (as evidenced in the next two screenshots from the clip).... 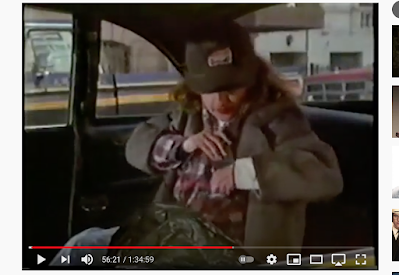 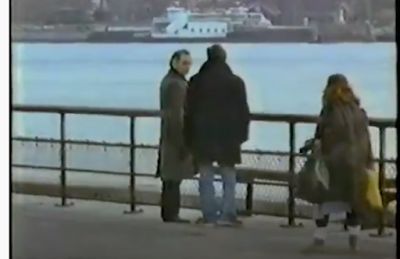 ... if you come to the subway cars you are long passed it.
Be that as it may, and  as I've said, Ed's career went on to reach great heights and I ultimately left the entertainment field to pursue my interests in photography and writing.
At the moment, my photographic works have been exhibited in NYC, and certain images have won awards, and have been rendered on to various surfaces by FAA (AKA Fine Art America).  Moreover, my work as a photographer has been recognized in interviews given by radio programs.
As for my writing, in addition to this awrd winning blog, I've had a number of articles published by the on-line "newspaper," I love The Upper Westside, and I have self-published a three volume book series, Words In Our Beak, where the stories are told from the perspective of a female cardinal named Cam. She apppears on the cover of each of the books, as evidenced in the next image.

Currently I'm looking for an agent to represent my book project, Imperfect Strangers.

The book discusses living with the medical condition known as Neurofibromatosis (NF).

Short videos discussing the project can be found on  You Tube and or Vimeo.
Hopefully, this book project will garner a fraction of the attention as Ed O'Neill has, for that would surely help in bringing awareness re the needs those who suffer from NF may have.
I'll leave it here for today, dear reader, but not without telling you why I've chosen this day to feature Ed O'Neill in today's posting: He was born on this day in 1946, so today is his 75th birthday and I wish him continued succcess in all his endeavors.
Posted by The Last Leaf Gardener