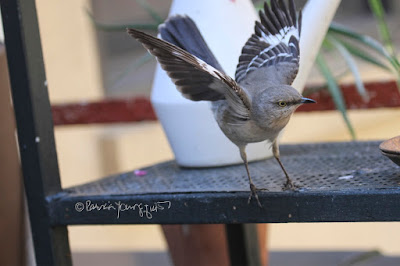 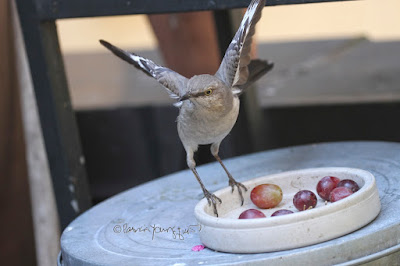 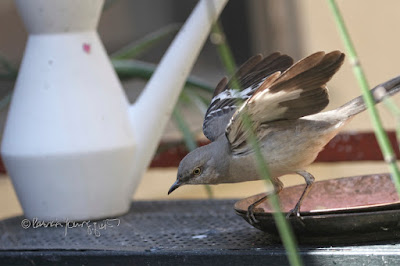 In last week's (3-23-2-21) segement of my Tuesday's Truths series, I pointed out that the avian creatures known as Northern mockingbirds (one is featured in the photos atop this entry) shared a similar behavior as the bird type known as European starlings, which is their uncanny ability to excel in mimicry.
For this week's segement, I am calling attention to a "quirky" behavior that Northern mockingbirds can be found doing from an early age: They are flashers!
There are various theories about why mockingbirds flash their wings -– to startle insects, ward off predators, attract a mate. So far, there is no scientific consensus on why they do this. But I do know why this bird type does other things and what they can teach us about finding our voice!
I've included one of them, named Harper, in my the third volume of my hard-cover book series, Words In Our Beak. This bird type is referenced in all the books but Harper has her own chapter in volume three, where I include a number of facts as well as photo-ops about mockingbirds.
The goal of these books is to open readers to a simple understanding of the winged world and their environment. Set in a rooftop urban garden (mine) in New York City, my story is told in the voice of Cam, a female cardinal, who visits it. Words In Our Beak is directed to children and adults who are curious about birds, and want to learn about them from a unique perspective.
The books make a perfect gift for someone who may be in quarantine or lockdown due to consequences of the coronavirus because the stories in them can bring the outdoors into the homes of those who cannot go out and about.
Posted by The Last Leaf Gardener