#ShowYourStripes but Show Your Spots Too! It's Rare Disease Day! 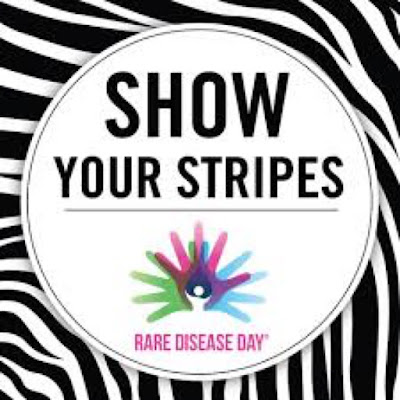 One of the things, worldwide, that people will be doing on February 28th, is "showing their stripes" in honor of it being Rare Disease Day. As a way of paying homage to it, I've posted a "promo" image atop this entry.
According to a number of sources, including NORD (The National Association for Rare Disorders), "In the U.S., any disease affecting fewer than 200,000 people is considered rare. This definition comes from the Orphan Drug Act of 1983 and is slightly different from the definition used in Europe. There are more than 7,000 rare diseases affecting 25-30 million Americans. In other words, one in ten Americans are suffering from rare diseases and more than half of them are children."
The striped animal known as the zebra is the official symbol of rare diseases because this creature's black and white stripes are part of what makes the animal to its unique.
NORD wants to remind the general public of these facts: "Everyone has his/her own stripes, those characteristics that make each individual distinct. While each of the more than 7,000 rare diseases are unique, there are many commonalities that unite the rare disease community. In the spirit of raising awareness regarding rare disease issues, people with a rare disease or have a loved one with a rare disease are being asked to SHOW THEIR STRIPES."
However, even zebras have a rarity within their own community. In 2019 Earth Touch News reported, "a plain's zebra in Kenya's Maasai Mara National Reserve dared to be different. A foal, sporting a unique brown coat accented with a smattering of white polka dots, was spotted by Maasai guide Antony Tira."
The creature can be seen in the next image. 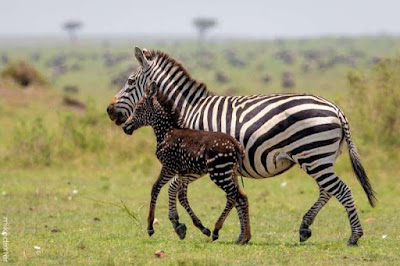 This spotty zebra was evidently named Tira by the guide who first found him.
Earth Touch goes on to say, “At first glance he looked like a different species altogether," photographer Frank Liu told National Geographic. While Tira may look like he's been crossed with an okapi, he actually owes his unique colouration to a rare genetic condition called pseudomelanism.
Skin and hair color in mammals comes from a pigment protein called melanin which is produced by specialized cells called melanocytes. In humans, melanin acts as a natural sunscreen, darkening the skin to help protect it from harmful UV rays.'There are a variety of mutations that can disturb the process of melanin synthesis, and in all of those disorders, the melanocytes are believed to be normally distributed, but the melanin they make is abnormal,' Greg Barsh, a geneticist at the HudsonAlpha Institute for Biotechnology, explained to National Geographic.
Under their striped coats, zebras have uniformly black skin as a result of melanocytes being evenly distributed across their bodies. According to Barsh, pseudomelanistic zebras like Tira have all of their melanocytes in place, but the melanin produced does not result in stripes, for unexplained reasons....
...Although Tira's sensational polka dots make him stand out in the herd, it's unlikely that his strange coloring will result in rejection from other zebras. Field studies in South Africa found two cases of zebras with atypical coloring that were able to form normal relationships with other herd members. Provided Tira can make it to adulthood, he should be able to fit right in."
The fact that it's unlikely Tira's unusual coloring unusual will result in rejection from other members is intriging to me, for this is not often the with human's who are born with medical condiions and/or rare diseases which alter their apperance.
I know this first hand as I was born with the rare disease known as Neurofibromatosis Type One (NF-1). This neurological condition causes tumors to grow on any nerve ending and push through the skin giving me a bumpy, lumpy appearance.
Because of the general public's fear of disfigurement I have found myself in countless situations where I have been shunned, marginalized and bullied for my physicality.
My living with NF and my long struggle of coming to terms with it is the subject of my book project, Imperfect Strangers. Short videos discussing the project can be found on  You Tube and or Vimeo.

Hopefully my book will be published soon and awareness re the rare disease of NF will be raised and spark awareness of other rare diseases.
Posted by The Last Leaf Gardener