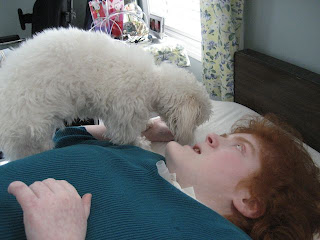 One month and one day ago today, on Veterans Day, November  11, 2010, Colleen Elizabeth Ormond (pictured above with the family dog, Hero), died at the age of twenty-five. I learned of her death late that night, not even a week after my post about November being a month of remembrance for those who have died, and for those who mourn them.
Colleen was born with with a severe form of a hydrocephalic condition which caused her to have several debilitating afflictions, including being unable to see due to resulting damage to her optic nerve. Yet Colleen Elizabeth Ormond gave much love from the minute she came into the world until she left it, passing peacefully in her sleep on Veterans Day, having been a warrior herself. Colleen had fought the good fight and has now finished the race. 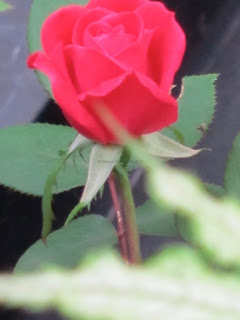 Today's post, because it is being entered on the third Sunday of Advent, a season that calls for paying attention, is in honor of Colleen Elizabeth Ormond, and her family, as well as to all who are affected by the loss of health and loss of  a child — painful losses at any time but especially at the holidays.


However with Colleen that was far from the case. Her family took great care of her; making many accommodations in their home to do so. Although no one has asked me to do anything in relation to Colleen's passing, the family did request that in lieu of flowers to honor Colleen, donations could be made to Katibug.  Katibug is a non-profit foundation helping families who are caring for medically and physically fragile children like Colleen, in their homes.

Colleen's passing (and the fact that her parents and sister cared for her in their home) has prompted me to donate one of images (in the new year) to be produced as an event program cover for Katibug. As a writer and artist, and someone who is afflicted with mild cases of both Neurofibromatosis and legal blindness, the least that I can do is to contribute in this small way with a donation of an event program cover for Katibug.

Earlier in the year I made a contribution to another non-profit organization that had reached out to me. This donation was in the form of a print selected from my Black and White photograph collection (posted on my web-site) at the request of the Foundation Fighting Blindness, as I discussed in a previous post.

In the new year, please watch for updates on this blog for details on the event program cover that will ultimately be chosen to be produced in honor of Colleen Elizabeth Ormond.
Posted by The Last Leaf Gardener