I'm following up on yesterday's blog post, where I discussed my reacquainting with Jewel, the Muscovy duck featured in volume three of my book series, Words In Our Beak.

Upon seeing the content of my Muscovy duck entry (which was posted on Facebook on 7-8-2020), bird rehabber, Amanda Remsberg, commented saying, "That’s amazing. Her kind originate from Central America, I’m not sure how she has adapted to the winters there. I’m glad she is thriving!"

As some of you might recall, I wrote about how "supposedly one of the workers at this [Boat Bain] office puts out a bowl of fresh water for Jewel on a regular basis" (in a 2017 entry here on Blogger) after I first encountered Jewel.

I'm not sure if the man seen in the picture atop this person is the one who does this (puts out fresh water) and I suspect others (including residents of the houseboats) do as it well, for Jewel was flapping her wing (while on a pier near to several house boats) as if she were trying to get someone's attention...


In any event, this narrative concludes my follow-up re my seeing Jewel earlier this week, but I did have a couple of other encounters with other members of the animal kingdom on that day.

One of them was my seeing a lone Mallard duck who was staring at something in the Hudson River, as evidenced in the next sequence of photographs.

This duck held his head so still for such a long period of time, that I thought he had a neck injury, or worse that he was dead. I was about to report my observation to the caretaker of the Boat Basin to see if he could access the well being of this Mallard and if need be, I was prepared to take him to The Wild Bird Fund.

The other encounter occurred  as I headed towards the Boat Basin's office. I met a woman who identified herself as Susan and the dog that was in her backpack as Jasmine (they can both be seen in the following photo-ops.. 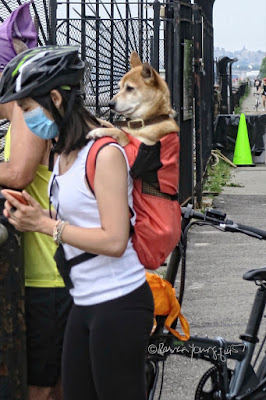 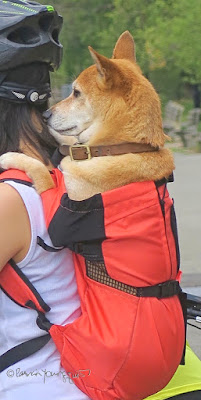 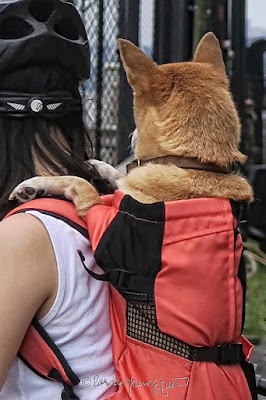 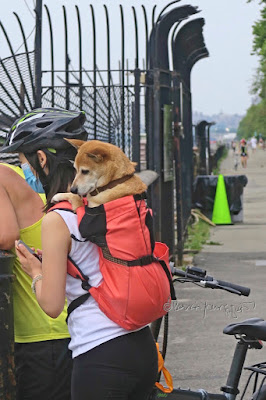 Susan and her partner Luis, upon seeing the Mallard standing in the same position for so long, concurred that he may be sick or dead. However, soon as we all agreed that I should speak to the caretakers, the Mallard moved and waddled away.

I was very grateful to see the bird was OK, but I confess I did not feel OK with me. Something about my seeing Susan, her loving partner, Luiz, and Jasmine; brought up a familiar sadness in me which is the fact that sometimes (IF NOT OFTEN) I wish I were someone else. Someone like Susan, seen here with her dog, Jasmine.

BUT then I remember that if I were someone else I wouldn't have some of the friends I have now because I might not even know those people. I'm not always grateful to be me but I AM GRATEFUL for the people I know in "real life" and cyber-space.

To gain some perspective on my disparaging thoughts, I turned to Mary Olivers's poem, Mornings at Blackwater Pond, where she references ducks, but mostly where she provides healing re one's inner demons (such as ones I've described in relation to me). Here it is:

For years, every morning, I drank
from Blackwater Pond.
It was flavored with oak leaves and also, no doubt,
the feet of ducks.
And always it assuaged me
from the dry bowl of the very far past.
What I want to say is
that the past is the past,
and the present is what your life is,
and you are capable
of choosing what that will be,
darling citizen.
So come to the pond,
or the river of your imagination,
or the harbor of your longing,
and put your lips to the world.
And live
your life.
Posted by The Last Leaf Gardener