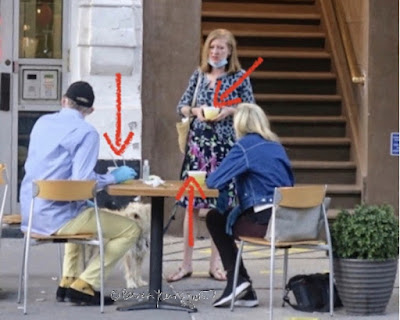 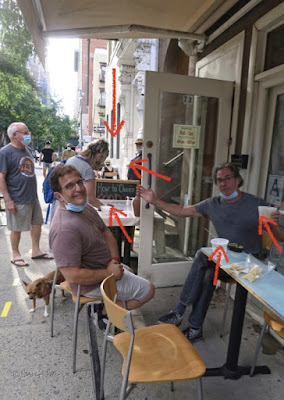 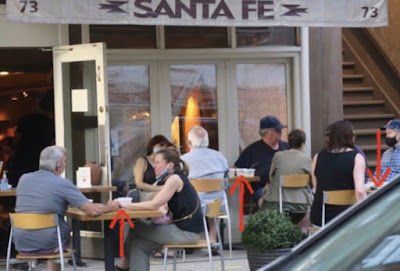 Eight days ago (on July 3rd 2020), I published an entry here on Blogger in honor of that day being earmarked (on an annual basis), International Plastic Bag Free Day.

July 3rd 2020, also happened to be three days before the onset of PHASE THREE (which was set for July 6th 2020) of the re-opening of NYC which was shutdown in March (2020) to prevent the spread of  COVID-19 (coronavirus). One of the things that was to be included in PHASE THREE was the allowing indoor dining (with a number of limitations) in restraunts and bars. Now, due to new scientific data about the spread of the virus, that option will not be available for PHASE THREE, and that option will remain unavailable until other safety measures (to be announced as more is learned about necessary precautions to prevent the spread of COVID-19).

Meanwhile, outdoor dining, which began to be permitted during PHASE ONE of our city's reopening has taken off and will be expanded. My main problem with this option is the amount of plastic being used to accommodate outdoor dining. Cocktails are being served in heavy plastic containers (the type that prepared foods from delis and supermarkets come in, and in addition to the cocktails being served in these containers, they also come with plastic straws; as evidenced in the photo-ops atop this entry (where I've indicated some of the plastic containers as well as straws by affixing arrows to my images).

These photos only represent one restaurant on the UWS, and with most other places doing the same thing, any person can well imagine what will happen to our environment, which has been proven time and time again is adversely (understatement) by the use of plastic containers and straws.

Prior to the onset of the pandemic in NYC,  folks were beginning to take notice and responsibility, limiting and even eliminating their use of these containers and straws. However, once the lockdowns went into effect, recycling services as well as composting options have been paused until June 2021 at the earliest.

"These are painful cuts to make, and we do not take these changes lightly," Sanitation Commissioner Kathryn Garcia said. "The city is facing an unprecedented crisis, and these service reductions will allow the city to maintain emergency services and its core municipal services."

News like this has been sad to hear, especially, when most everyone knows, "Plastic pollution is a global catastrophe and sadly it is a man-made one... approximately 500 billion plastic bags are used on a global scale? Just think about how many of these bags will end up littered all over the planet. This is having an extremely detrimental effect on the environment, wildlife and indeed human health.

The marine ecosystem in particular is suffering immensely as a result of plastic pollution. 31 species of marine mammals are known to have ingested marine plastic whilst over 100 species of sea birds have ingested plastic artifacts. Over 250 species have become entangled in plastic, whilst entanglement rates of approximately eight percent have been discovered in some sea lion and seal species.

This pollution is also extremely dangerous because it is leading to the transportation of invasive species, which can have a catastrophic influence on biodiversity. We are not immune from the impact either. Plastic particles in the ocean attract toxins, which in turn affects us, as the toxins enter the food chain."

Whenever I voice my concerns to certain individuals, who for now shall remain nameless, I am highly criticized and accused of wanting restraunts to be forced to bell-up due to financial loss incurred re lockdowns.

I have no interest in seeing any restaurant, or any place of business for that matter being forced to close; however, I very much am concerned about the impact outdoor dining will have on the environment as well as on the spread of the pandemic, due to the lack of adherence re social distancing and/or mask-wearing that is often the result when people gather outside to eat, drink and be merry.
Posted by The Last Leaf Gardener