Friday Follow-Up: Mysterious Muscovy has a name! (As well as a number of friends!) 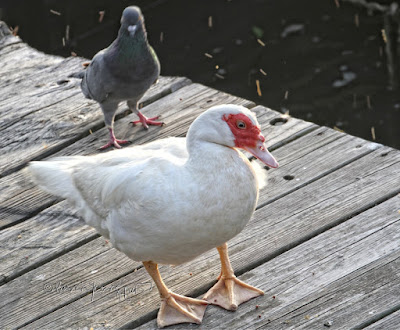 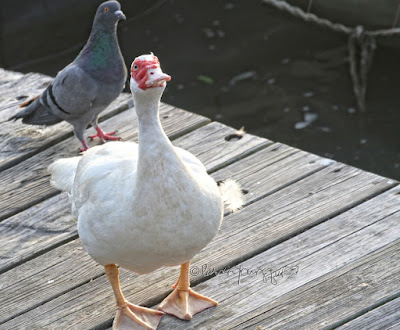 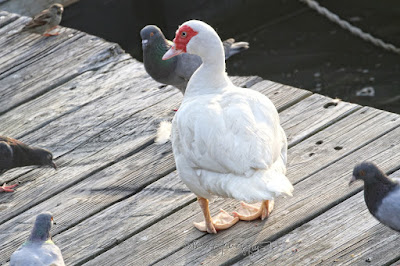 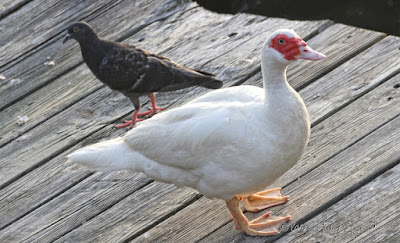 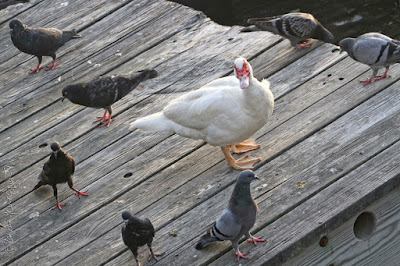 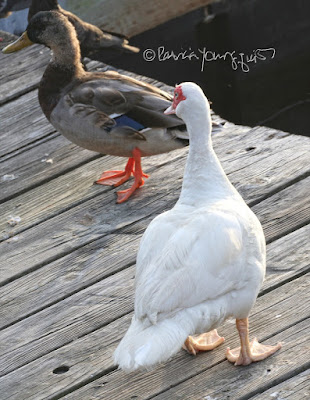 This past Friday, September 22, 2017, I went down by the riverside (Hudson River) to see if the Muscovy duck who I first met on Wednesday, September the 20th, was there. I was so pleased to have a chance to see the lovely creature again, also to find him/her amongst other avian creatures, including house sparrows, pigeons, and molting Mallard ducks; all of whom can be seen in the photographs atop this entry. A woman was on the same pier where I stood. She told me that this Muscovy duck's name is Jewel. Then she informed me that Jewel has been coming here since 2015.

She also told me that in inclement weather, Jewel and other members of the fauna community take refuge under an upside boat, 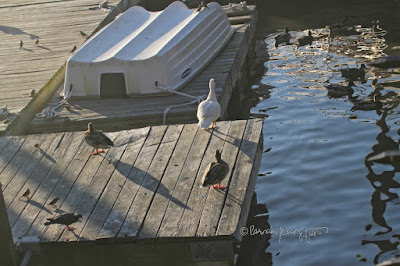 that is on one of the docks.

Moreover, the stranger informed me that late at night, Jewel, goes to an adjacent pier to sleep through the night. Evidently she does this near a light on the pier, which also happens to be near a leaky hose where she can get a drink of water. 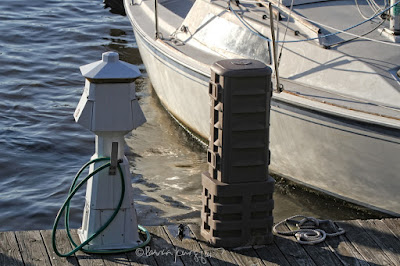 This light and leaky hose are very near to the twenty-four office (that oversees the many boats which are docked in this basin) as evidenced in the next image. 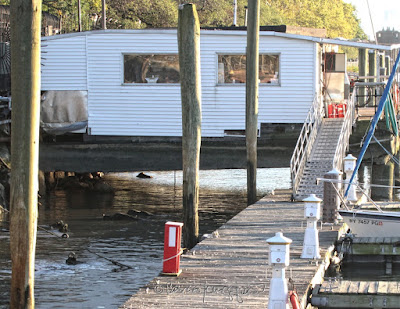 Supposedly one of the workers at this office puts out a bowl of fresh water for Jewel on a regular basis, so she has definitely captured a few human hearts. And it seems that she has captured the hearts (or at least the trust) of a number of members of the fauna community, as evidenced by my pictures atop this entry.

The woman also pointed out another duck variety (Khaki Campbell) who spends time in close proximity to the area which I've been describing. The Khaki Campbell is featured in the next image with Jewel. 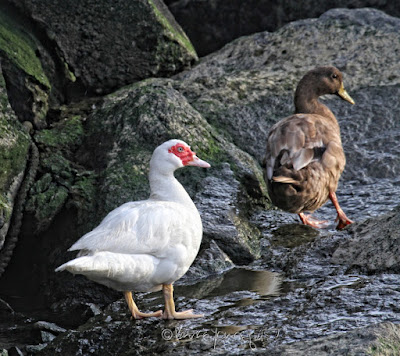 In the following pictures, the Khaki Campbell can be seen with both female and male Mallards. 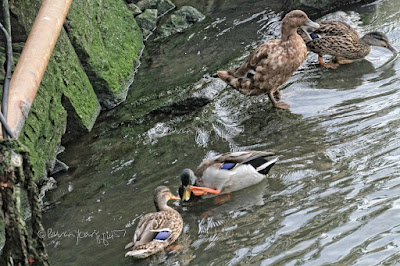 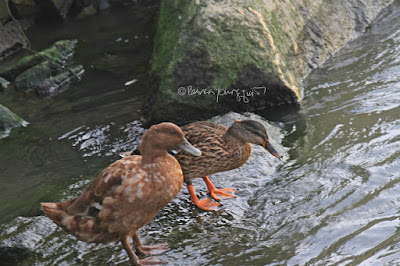 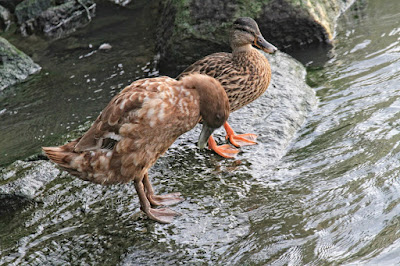 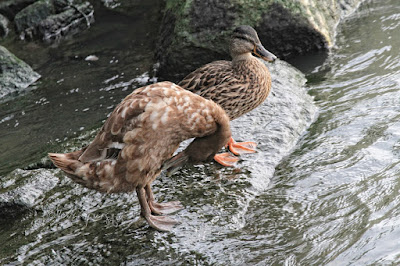 As you can see some of the Mallards are molting (which is a topic I discussed in this past Tuesday's blog entry. In any event, according to a web-page for Melzer Farms, "The Khaki Campbell is one of the more famous and popular duck breeds due to its excellent egg production. It was introduced in 1901 by Mrs. Adele Campbell of Gloucestershire, England. She experimented with Runners crossed with Rouen and Mallards but never revealed the exact genetic makeup of her Campbells'. The advantage over the pure Runner was a more useful carcass for meat and improved egg production. Though they have been turned into an exhibition type breed, she was adamant that her birds were designed for production, not the exhibition hall.

Initially they were a fairly mixed color breed but later an emphasis was placed on the current khaki color. It is interesting that at the same time the khaki color was being bred into the Campbell, there was a patriotic fervor for the British troops fighting the Boer War who also wore the khaki color. Once the "Khaki" was attached to "Campbell", the breed gained even more popularity. The Khaki Campbell gained even more renown due to the egg laying contests where it averaged up to 39 more eggs laid than the second best breed. One Khaki Campbell laid 346 eggs in 365 days while another laid one egg a day for 225 straight days!

Khaki Campbells gained even more notoriety with the standards established by the Jansen family of Holland who had up to 50,000 ducks laying at a time with egg production averages of 335-340 eggs in 365 days during the 1950s. They started in production at about 20 weeks of age and egg size averaged 72 grams (2.6 ounces). Mortality during growth and their first year of egg production was only 2.5%. Interestingly, each duck was penned in its own pen and shelter which surely contributed to their outstanding production. Eventually the Jansen flock was dispersed but the Khaki Campbell tradition was carried on by the Kortlang family in England who still breeds them. John Metzer has visited the Kortlang farm and our Khaki Campbells have some Kortlang blood in them."

Like the Muscovy duck, who can tolerate a river rat in their midst (which was discussed in this past Monday's blog entry, the Khaki Campbell duck variety also seem to be undaunted when it comes to sharing their space with such a creature as seen below. 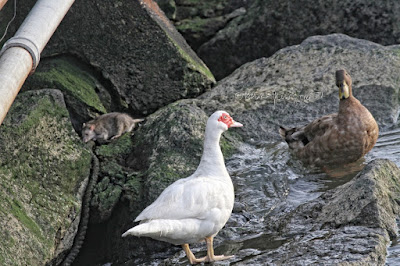 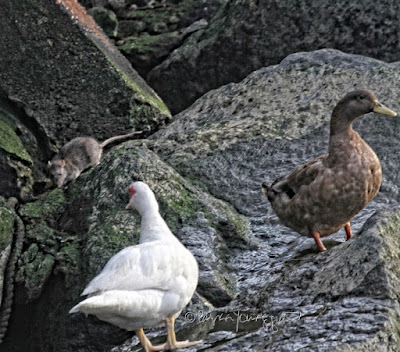 In any any event, I have more details to share with to share with you re the Khaki Campbell duck variety, and I will do so tomorrow (here on Blogger) within a Saturday Sequel post. STAY TUNED!
Posted by The Last Leaf Gardener