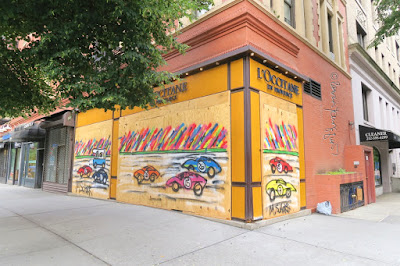 Plywood boards that were put up on many places on the UWS as well as in places throughout NYC (which I discussed in my blog post published one month ago today on June 5 2020) as a result of the vandalism and looting that occurred during the recent protests and demonstrations (over the murder of George Floyd) became a canvas for artists mostly in Soho.

However, quite recently the boards "covering" the store known as L'Occitane en Provence (on Columbus Avenue at 69th Street on the UWS) became a canvas too; as evidenced in the picture (posted atop this entry) which I took yesterday.
Posted by The Last Leaf Gardener