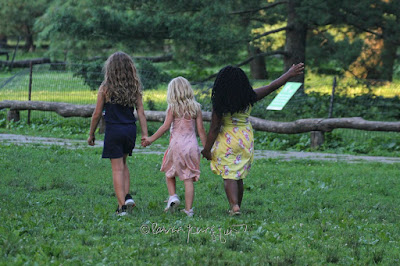 Last year I spent part of my Fourth of July with the three lovely girls seen in the image atop this entry and in a blog post (published on 7-6-2019) I mentioned that I had a "Three Dog Night" moment (as some of you know Three Dog Night is the name of a pop music group) in Central Park and that I thought of their 1972 song (Black & White) when I saw these three young children playing.

A year has now passed since I had my "Three Dog Night" moment when spending part of my Fourth of July in Central Park, and this particular patriotic holiday is somewhat somber, because our nation, along with many parts of the entire world are in the midst of the coronavirus pandemic which began in late 2019.

What this means in terms of Fourth of July celebrations is — folks IF they doing the right thing —  social distancing. Moreover, the wearing of face-masks will me mandated and strictly be enforced.

The scene I witnessed last year of two mask-less (no one had heard of a need to wear these  nor could they foresee it) sisters visiting NYC (from New Orleans) enjoying meeting and befriending a mask-less girl about their age is highly unlikely with so many restrictions in place.

Moreover, with so much racial tension in the city (and also throughout the world) seen in the many protests and demonstrations to raise awareness re #BlackLivesMatter that began to take place after the murder of George Floyd, the sweet interaction of these children seen in my photo atop the entry as well as in the one directly below... 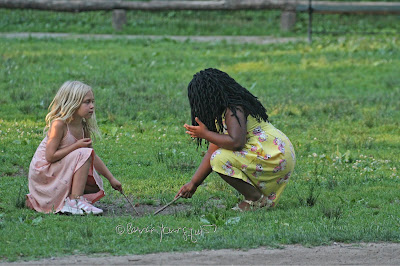 ...might be compromised and not evoke any "Three Dog Night" moments.

I must confess that I've only recently learned the history of the song, Black & White, which was evidently "written in 1954 Earl Robinson and David I. Arkin (the late father of actor Alan Arkin), in response to a celebration of that year's Brown v. Board of Education decision. The song was first recorded by Sammy Davis Jr. in 1957 and later by Pete Seeger, the folk-rock group Three Dog Night, the Jamaican reggae band The Maytones, and the UK reggae band Greyhound."

I also only just learned (also from Wiki) that this song's original lyrics opened with this (following) verse, in reference to the court:


Their robes were black, their heads were white,
The schoolhouse doors were closed so tight,
Nine judges all set down their names,
To end the years and years of shame.

My source for this states, "... the version of the song recorded by Greyhound, and subsequently covered by Three Dog Night, did not include this verse - making the song more universal, but also less historically specific."

However, prior to the versions sung by Greyhound as well as Three Dog Night, certain performers including Sammy Davis Junior and Pete Seeger did include the lyrics, "...Their robes were black, their heads were white, The schoolhouse doors were closed so tight, Nine judges all set down their names, To end the years and years of shame..."

I can only find the Pete Seeger version, so I will leave you with a chance to hear it (posted below) but not before wishing you a safe and healthy Forth of July.