A Very Different Westside Story These Days (History in the Making)


The copy of a PEANUTS comic strip atop this blog entry is from the 5/31/2020 post on the Facebook Page for the Charles M. Schultz Museum. The strip is from 1978 but was posted on the thirty-first  of May (a few days ago) to commemorate Christo, the artist Snoopy is speaking about here and included the FB entry include this explanation:

Charles M. Schulz met Christo in 1975 when the environmental artist, along with his wife Jeanne-Claude, were in Sonoma County working on the preparation for their installation art piece, “Running Fence,” a 23-mile, 18-foot high white nylon curtain that zig-zagged over the Sonoma County hills before plunging into the ocean at the Marin-Sonoma county line. Schulz attended town hall meetings to support the “Running Fence” concept during the planning stages and this began a friendship based on mutual respect and admiration that lasted a quarter of a century.
On November 20, 1978, Schulz memorialized Christo’s work in this Peanuts comic strip. Twenty-five years later, in October 2003, Christo and Jeanne-Claude gifted “Wrapped Snoopy House” [seen in the next image] to Jean Schulz, sharing that it was Christo’s conception of Snoopy’s imaginary doghouse. The work is on permanent display in the Schulz Museum.

I first became acquainted with Christo's work when he and his wife put up their art installation known as "The Gates" in Central Park a number of years ago.

A few copies of greeting cards (that were sold at the exhibit and featured in a prior entry here on Blogger) can be seen below.


In any event, I thought of the "wrapped doghouse" these artists gave to Schultz  upon my seeing how the UWS Apple Store is being protected (their entire glass store is now completely covered with white construction material as seen in the following photo) from being vandalized during this horrific time in NYC (and other places throughout the world).


This place of business is one of many in my near vicinity who have had to take precautions, and I included a couple of them (Polpette, a restaurant, and Theory, a clothing store) in this past Tuesday's blog post).

However, none of them have covered their exteriors to the extent that Apple has, as evidenced from the next series of images of various stores.


One restaurant, Il Violino, is still attempting to offer pick up to take out food but a person not even realize the option if they didn't read the notice scrawled on their protective wood (as evidenced in the next picture).


I'm told that another restaurant, Cassis, seen in the picture directly below... 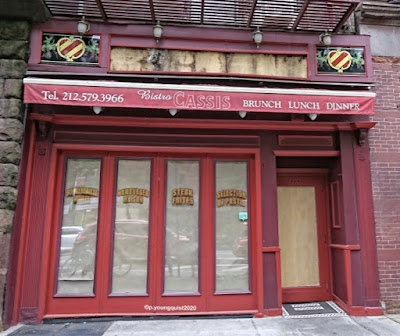 ...will close for good. Such a shame and to think that it was only this past October and the one the year prior (2018) vandalism was far from thee owner's  minds when they decorated for Halloween.


Hopefully this violence will pass quickly before too much more destruction occurs. Meanwhile, it seems most people are doing their best to remain grateful for any good that is occurring, as evidenced in the nightly #ClapBeacuseWeCare tributes that are held to pay homage to first responders, healthcare professionals and essential workers who are keeping us safe during the coronavirus pandemic.

I'll end with a couple of photo-ops from last night's session which was the sixty-sixth one.