UPDATE ON PABLO, THE JAY 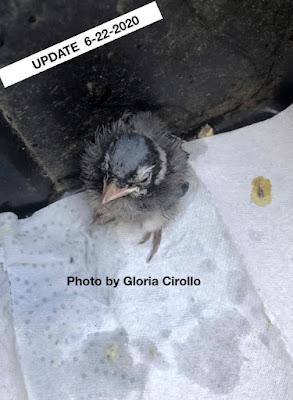 A very sad start to this week. I was all set to meet the injured baby Blue Jay (whom I wrote about in a recent post here on Blogger) and help with taking him to The WBF (Wild Bird Fund) this morning, when I received word that he had died during the night.

At least, the sweet creature was not left to die on an Upper Eastside Street as had been the case with his dead parent, whom he was found with by the dear Gloria Criollo.

Though he suffered greatly seeing his parent killed (presumedly by a car) and then left alone, he received physical warmth (heating pad) and nourishment (chopped up blueberries); both at the wonderful advice from bird-rehabber extraordinaire, Amanda Remsberg,  in our version of tele-med for an injured bird; he did die in dignity surrounded by love.