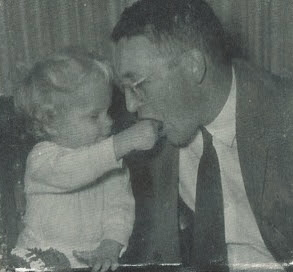 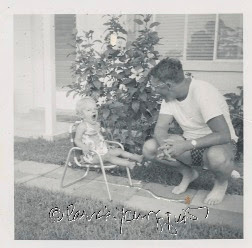 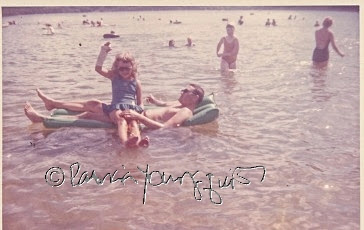 Yesterday was Father's Day and the photographs atop this entry are ones from various moments of childhood and they feature me with my dad on various occasions.

He moved out of our house the year the latter picture (where I have a cast on a broken wrist) was taken; so Father's Day can be such a bittersweet holiday for me.

Sometimes bitter because he left when I was so young and I subsequently spent most of my life trying to garner his attention and approval to very little avail.

Moreover, he passed away in 1995 and that adds to my sadness on Father's Day.

But Father's Day can also be sweet because no matter what, a father is still a father, and mine had a quick wit, which is a trait I have when I don't take myself so seriously.

On another note, when it comes to the role of a father, I have enjoyed seeing how seriously birds take this role, which I have been able to observe firsthand when Northern cardinals spent time in my rooftop garden (some of my observations of a father and daughter  cardinal can be seen in the next two pictures).


As many of you know, cardinals are featured in my three volume book series, Words In Our Beak, where the stories are told from the perspective of a female cardinal named Cam.


I've also been fortunate enough to observe a male cardinal with his daughter in nearby Central Park. They can be seen in the next series of images.


Another bird type where the father takes his role in parenting is Canadian Geese. Both the goose and the gander take responsibility in caring for their loved ones, as evidenced by the next sequence of images.

Canadian Geese and their goslings have a story within volume two of the aforementioned book series, Words In Our Beak (WIOB).