An Unpleasant (but typical) Encounter 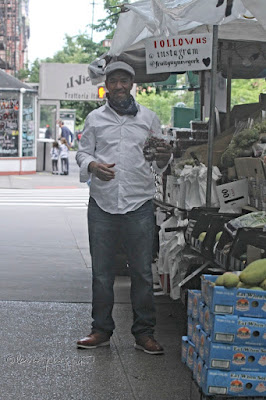 However, I had to go out on May 11, 2020, to my orthopedist as I was past my need to follow up on the injury I sustained to my Greater tuberosity this past January and two days after seeing this doctor, I began physical therapy at a facility in my hood.

Other than the aforementioned occasions, I've not been outdoors, except to water my rooftop garden and to stand in it when participating in nightly #ClapBecauseWeCare sessions (tributes that honor first responders, healthcare professionals and essential workers who keep people safe during the this COVID-19 pandemic).

In any event, this past Sunday I took a very short walk carrying my DSLR, which is something I've NOT done in the few times I've ventured outside.

I was wearing a hat and my sunglasses plus a face-mask (a standard one, I don't have the ones I created yet), which meant my facial features were nearly covered, but I had opened my jacket a bit as it was getting hot and it wasn't opened very far, only my neck and the pendant I never take off (except for medical procedures) were exposed to the elements as a result.

Be that as it may, during my short journey, I passed a man (who can be seen in the image atop this entry) selling fruit on the street and was taken by the fact that he was on Instagram (which was indicated in a large print sign attached to his stand).

He asked me if I could take a few photos of him alongside it and I agreed to do so, even though I normally don't photograph people (except these days when I take pictures of #ClapBecauseWecare participants).

He even directed me as to where to stand in order to get a full body shot of him.

Upon my completing this task, he pointed to my neck and asked, "What's that?"

I thought he was referring to my pendant (which is a Miraculous Medal, a devotion to Our Blessed Lady), but indeed that was not; rather he was pointing to my many neurofibromas, that I have as a result of being born with Neurofibromatosis AKA NF.

He then grimaced, demanding to know what they are.

I found myself explaining that it was nothing contagious and trying to reassure him, but it left me somewhat broken in spirit.

Explaining this condition has been an exhausting (and often heartbreaking) life-time experience (which is many years at this juncture) and I don't always feel very composed; especially when being so vulnerable from sheltering in place for a length of time.

What a great basically first encounter when being out and about again, eh?

As some of you may know, I've written a book length project, Imperfect Strangers, that discusses growing up with NF and I've posted a video re my endeavor which can be viewed within my Vimeo channel as well as my You Tube channel.


In any event, part of the completed manuscript was mailed to a prominent publisher (they only wanted to see the first 50 pages) a week or so before our governor and mayor shut down the city.

In my submission, I included a copy of the handwritten letter (another copy is posted directly below) sent to me by actress Gillian Anderson who read part of my story. She gave me permission to include it in my submission.

Encounters like this most recent one, truly confirm to me that there is a need for my book to be published in order to raise awareness and educate the general public who know little about NF.

For by those of you who are interested, the month of May (which we are currently in) happens to be Neurofibromatosis Awareness Month. Hopefully my unpleasant (but typical) encounter made at least one more person — this fruit vendor — aware of Neurofibromatosis.
Posted by The Last Leaf Gardener