As of this blog entry, we only have ten more days left in the month of May, which happens to be known as Neurofibromatosis Awareness Month. I was born with this horrific condition and have attempted to raise awareness about it through postings here on Blogger as well as in my presentations (speaking engagements) including one I gave in December of 2018 at NYSEC (The New York Society for Ethical Culture).

Moreover, I've written a book, Imperfect Strangers, about living with Neurofibromatosis (NF) and today marks my one year anniversary of posting my video (the cover for it is posted atop this entry) about the book.

The video can be viewed on Vimeo as well as on You Tube with the following description:

I admit that I often hesitate to admit that I have NF-1 because people's attitudes towards me having it have caused great emotional pain that has often been harder to live with than any pain caused by a neurofibroma.

Just this past February, I was speaking over the phone with a KLM, a woman re the delays in my having a marketing intern when she asked me how I addressed my "skin condition" when meeting with people for the first time. I told her that I did not have a skin condition, rather, I had Neurofibromatosis, a neurological condition in which one of the manifestations causes lump and bumps (neurofibromas) to appear all over the body.

Her response was to tell me that I should work with an intern by phone because they might be afraid of catching something from me and end up looking like me.

I assured KLM NF is not contagious but she still insisted that I work with people by phone so that "they would never have to see what I look like."

I have been devastated by her words but they did prompt me to return to my book project, "Imperfect Strangers."

The first fifty pages of this book project was snail-mailed to a well known publisher this past March (3-10-2020).


The following cover letter was included in my submission:

My name is Patricia Youngquist. I’m an author, photographer, and public speaker. Before I introduce my manuscript which I am writing to propose you publish, please permit me to ask a few quick questions:

Have you ever found yourself waiting for a bus, recalling a pleasant memory when your thoughts are interrupted by a perfect stranger who points to you and shouts, “You have a lot of bumps!”

Or have you ever been in a busy Starbucks when a perfect stranger in line behind you points to a “flaw” on your arm and demands, “What’s that?”

Or have you been told by a perfect stranger that you must’ve been bad in a past life because otherwise you wouldn’t look the way you do?

I hope, for your sake, you have not had to endure thoughtless comments such as these. However, these scenarios, among many others, have been a fairly regular occurrence in my life. I was born with a congenital neurological condition that causes tumors to grow on any nerve ending and push through the skin giving me a bumpy, lumpy appearance. The general public’s fear of disfigurement has resulted in the interactions I’ve mentioned. The neurological condition I’m referring to is called Neurofibromatosis Type One (NF-1) and occurs in one out of every 3,000 children born, so I am certainly not the only person in this situation, none-the-less, the ramifications of NF can cause profound loneliness.

Living with this condition is the autobiographical subject of my book, “Imperfect Strangers.” In it I recount experiences and I speak of my journey to make peace with the subtle (and not so subtle) discrimination I have endured as a result. Please know my story is not limited to NF, for it will resonate with anyone who has ever been or felt marginalized for who they are and because of their physicality.

I was initially prompted to write my story some years ago following a chance encounter while walking up Columbus Avenue:

An excited young woman began chasing me down the street and, when she caught up with me, announced that she couldn’t help but notice my bumps. Did I, by any chance, know if I am afflicted with Neurofibromatosis Type-One or Type-Two? At that time, I didn’t know there were two types, but she pressed on by asking if anyone in my family also has the condition. When I told her that there was no known history of NF in my family, she proclaimed that I must be glad the Chromosome #17 linking my illness to mutation has been discovered. Up until that afternoon I’d not met anyone who knew about Neurofibromatosis.
She apologized for being so abrupt and explained that she was compelled to speak with me—never having seen someone who has NF walking so nonchalantly in public—and wondered if I would be willing to talk to her young daughter who had been diagnosed with NF. Her main concern was that little bumps were beginning to appear on her young girl’s face. The woman was worried as to how they might manifest and how to help her daughter cope. She said she’d only seen pictures of people in books with gross lumps and bumps, not a “mild case” like mine.
I explained that people have not always perceived my case as mild. They often claimed I had Elephant Man’s Disease. The woman quickly informed me that years ago it was discovered that Merrick—upon whom both the play and film, “The Elephant Man” are based—had suffered from Proteus Syndrome, a rare condition similar to NF.
The woman agreed that the general public and those who work in the medical community need to be better educated regarding the emotional consequences of living with Neurofibromatosis.
Shortly after this chance encounter, I began to address my own self–perceived unattractiveness, and that is when I discovered Gillian Anderson, the well-known actress, has been an advocate for NF ever since her younger brother was diagnosed with the condition.
I am an author and both of these events helped me to realize I could contribute to raising awareness about NF through my writing. I subsequently sent Gillian Anderson a series of  vignettes describing my experiences with this disorder. Much to my pleasant surprise, she responded with a handwritten note saying she found my story “compelling and had no doubt others will as well” and she went on to say, “Bless you for being willing to write about the details of your life without shame.”

Now, years later, Gillian’s encouraging words come to mind after a phone conversation with a professor who was helping me to recruit a marketing intern. She asked me how I addressed my “skin condition” when meeting with people for the first time. I told her that I did not have a skin condition, rather, I had a neurological condition in which one of the manifestations causes lump and bumps (neurofibromas) to appear all over the body.

Her response was to council me to work with interns only by phone since they might fear catching something from me and wind up looking like me. Despite assurances that NF is not contagious, she remained unconvinced, insisting I work with people by phone so that “they would never have to see what I look like.”

Though devastated by her words, the incident reaffirmed the importance of "Imperfect Strangers.” The first 49 pages along with a 1.5 page prologue are enclosed for your evaluation, along with a copy of Gillian Anderson’s note, which she has graciously allowed me to share.

The story begins from my perspective as a child, after having just celebrated my fifth birthday. I’m fearful about the spots on my skin and saddened about being taunted for wearing “Coke Bottle glasses” since I turned three; so I make a wish to be someone else.

As my school years continue, the symptoms from NF become more exaggerated, altering my appearance. I’m bullied and take drastic measures to change how I look.

During my college years, an out-of-state doctor’s opinion is warranted in order to evaluate a possible auditory nerve tumor (which can occur when one has NF). I leave school to travel to the physician. To my horror when I am in his vicinity, I am sexually assaulted.

Upon recovery, I move to Manhattan, motivated by a desire to reacquaint with my father who had left our family many years prior.

Challenges due to medical issues continue to occur in the workplace and everyday life. I do not give up, even though I continue to be bullied.

As the years pass, I realize physical healing from the consequences of NF will never be possible, nor will I be able to stop encounters where people ridicule me.

However, I ultimately come to see the “silver lining” in being born with physical differences.

It is through a Northern cardinal who visits my garden that I develop an awareness of birds and how they react to physical appearances within their avian community. This leads me to meet and observe other creatures in my midst. Every time I encounter other birdwatchers, our exchanges are pleasant. People I meet while bird–watching, or simply enjoying nature, never question my looks. I am accepted as I am.

Something about observing our natural world brings persons of all ages, races, genders—with and without physical challenges—together. Studying the lives and habits of birds through this perspective seems to have sparked a deeper understanding of empathy and tolerance in our world.

With thanks for your time and attention, I look forward to hearing your thoughts about this proposal and the possibility of working with you in the publication of my book, “Imperfect Strangers.”

Just a few days later,  NYC, where I live was in lockdown and in compliance with  our state's governor 's request, I sheltered in place from 3/21/2020, until 5/11/2020, when I had to go to my orthopedist to follow-up on the injury I sustained to my Greater tuberosity earlier this year.

I've now been out and about a few times to go to physical therapy at a facility (SPEAR) which is located in my UWS hood... 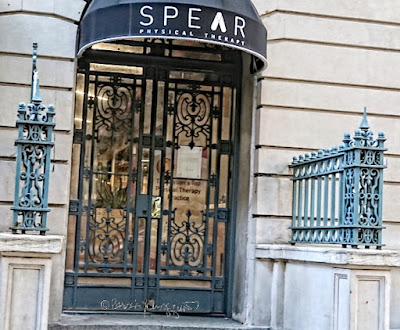 ... and on their wall a slogan is posted: LIFE CAN'T WAIT (as seen in the image below). 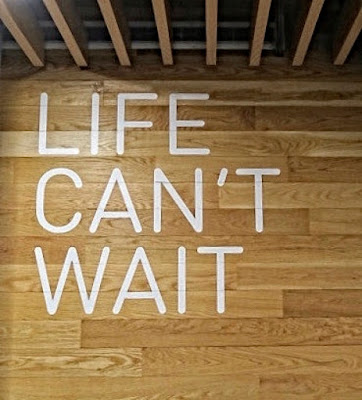 The words are a stark reminder that even though I've sheltered in place (as countless others have done), life has marched on and on and on.

It's hard to believe that twenty-one days of this Neurofibromatosis Awareness Month have passed and with the exception of querying WNYC (my local NPR radio station), I've done nothing in terms of promoting my NF book or talks because all I can think about (for the most part) is the impact of the coronavirus pandemic and the severe pain I'm enduring with my injury.

I'm grateful that in spite of my basically undivided COVID-19 attention and being hunkered down for so long that I have participated in #ClapBecauseWeCare sessions and did create face-masks.

However, I must confess that I'm at a loss as to any next steps to take re Imperfect Strangers or any of my other projects for that matter, including ones related to Words In Our Beak, my book series...


...and this inability to be able to do much of anything to advance my projects is frightening, because indeed, LIFE CAN'T WAIT.
Posted by The Last Leaf Gardener