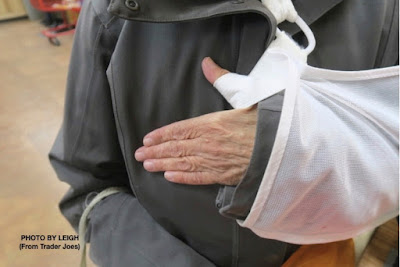 It's Groundhog Day and those who are not fans of winter (I don't mind it) are happy to know that neither NYC's groundhog (in Staten Island) Philadelphia's Punxatawney Phil, saw their shadow and folk lore has always seen this is a sign of an early spring.

Regarding seeing one's shadows, I wish I had not seen mine on January 18 2020 when I was taking photographs for an article I was writing about the first snowfall of the decade, because when I moved in order to not have it be in my picture, I fell and broke my greater tuberosity.

A consequence of my accident is a need to wear a sling, as evidenced in the photograph atop this entry. However, if I had to sustain this type of injury, I'm glad it was on my left side because I'm right-handed.

Thankfully — albeit quite slowly — I've still been doing articles for "iLovetheUpperWestside," including one about UWS-er, Maya Schaper, which I wrote about in a previous entry.

Moreover, yesterday, another one of my articles was published and it's related to shadows too; although a very different type of association with the word shadow.

You see, the article I'm now referring to is about Donna Wandrey, who played Roxanne Drew in the 1960s-1970's gothic soap opera, Dark Shadows.