Last evening I participated in the 8th session of the 7PM clapping/cheering nightly event (that has been dubbed #ClapBecauseWeCare). As I've been saying in recent posts here on Blogger, this event honors first responders and healthcare workers who are keeping New Yorkers as safe as possible during the coronavirus pandemic.

Many people participated but I only took a few pictures as it is hard to clap and use a DSLR at the same time.

The photo featured atop this entry is of a woman who lives in a building across the courtyard (and slightly west). She has been a regular participator.

That session was personally wonderful for me, as I've been thinking about the welfare of someone who lives in a building directly across the courtyard. His name is BH and he can be seen in the set of pictures directly below. I've known him for many years but I had lost his phone number. 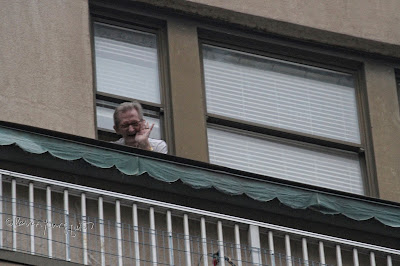 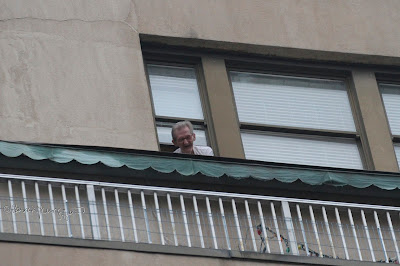 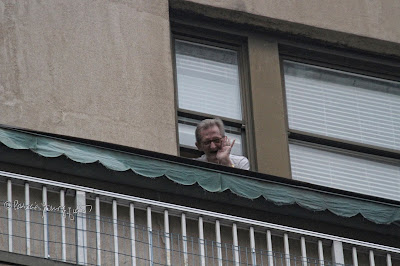 I even messaged someone who is is in my FB Community (who has also known him for many years) in the hopes she'd give me his cell number. Suddenly I happened to remember the building's' switchboard phone number.

I had dialed it on countless occasions when touching base with my dear friend, VB, who had lived in BH's building for years before he got sick in 2014 and ultimately moved to an out-of-state nursing home facility. Even though VB has been gone for nearly six years now he and I still kept in touch.

In our Thursday night (4-2-2020) phone conversation, he had inquired about the welfare of BH, who recently lost his longtime partner.

I phoned BH last (after I had talked with VB) and told told him VB had asked about him. I also told him about the clapping/cheering sessions as I knew his apartment had a view of many participants and of my garden.

What a blessing it was to touch base with BH by phone last night and then again through tonight's tribute. Like yours truly, BH has had to remain home since the evening of March 21st.

I'm sure there are many others who are in our situation and who likely welcome the nightly 7:00 PM session in order to feel we can do something! Because the ritual begins promptly at 7:00 PM, I now think of the lyric lines, "Seven, seven, that's the time...," from "Sentimental Journey."

I'll leave it at that for tonight, dear reader, but not without including this You Tube video (posted below) of Ella Fitzgerald singing, "Seven, seven, that's the time we meet at seven...".