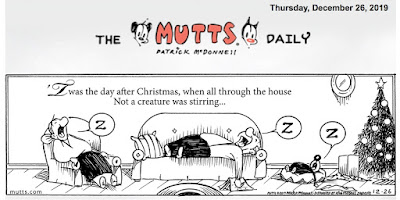 Unlike the characters in The Mutts comic strip (posted above), on this day after Christmas,  I am stirring, but like them I'm exhausted, so I'll keep it short.

Today is Boxing Day "which is only celebrated in a few countries; mainly ones historically connected to the UK (such as Canada, Australia, South Africa and New Zealand) and in some European countries. In Germany it is known as "Zweite Feiertag” (which means 'second celebration')."

I've referenced the holiday in prior entries within this blog.

Today is also Saint Stephen's Day, "the day when the Carol 'Good King Wenceslas' is set. That carol is about a rich King helping the poor. It was written in 1853 and reflects the Victorian view of being charitable at Christmas."

In honor of the occasion, as I've done in the past, I've included a You Tube video of a choir performing the carol.

While I am stirring it is with exhaustion, so, I'll leave it at that for today, dear reader.
Posted by The Last Leaf Gardener