Today is not part of my blog posting schedule for this week, but it is being published in honor of what would be the seventy second birthday of my dearly departed friend, Donna De Solis, who passed away on June 25th, 2015. The video posted atop this entry is one I created to honor her memory (at the request of her son) and it is included within my Vimeo as well as my You Tube library.

We first met in the mid 1980's. Donna (or DD as many called her) lived in my hood was a frequent visitor to my rooftop garden and I attended her annual Christmas parties held in her home.

I have created other "mini movies" in her honor, including the little slide show, posted below, which was produced a few years ago. This mini-movie's background music features the traditional holiday song, Christmas Auld Lang Syne, being sung by Bobby Darin.


The song and Darin's rendition of it is something I heard on an annual basis when I attended DD's Christmas parties, including the Christmas party she held in December of 2014; which would be her last. Christmas Auld Lang Syne, when sung by him, was one of her favorites. If you want to sing along, while watching the video below, these are the lyrics:

As you have seen this video features an array of birds who are spending time together. In the first slide you see Cam, my visiting female cardinal with her son, Vincenzo.

Each photograph in the presentation has been included in Cam's the first of my three volumes book series,  Words In Our Beak.


In her volume one story, Cam states that "though it’s true that we cardinals feed our young, sometimes I try to give my children a bit of tough love because I want them to have the confidence to be on their own. But I confess that I’m known to give into their begging tactics. While I want my children to be independent, occasionally I do give in when they beg, because time spent with a child is fleeting. I once overheard a conversation between two folks when people-ing, and it is this overheard line which expresses my beliefs: 'I gave into my toddler’s wishes, as I figured it wouldn’t be long before he’d be asking for the car keys . . . time flies,' a woman stated. And as one who flies, I couldn’t agree more. I value my time with Vincenzo, but I still force myself to push him to fend for his own seeds, even though I know that once he’s successful at his endeavor, as he seems to be here, he will leave Mac and I to pursue a life of his own."

Cam is correct that time spent with a child is fleeting, but I'll go one step further and say time sent with anyone is fleeting!


Little did I know that at Donna's Christmas party on December 20, 2014, when her guests and I sang the words, "We sing His praise this day of days, And pray next year this time, We'll all be near to share the cheer, Of a Christmas auld lang syne," that Donna would be dead the following June.

My dear friend, and Saturday morning walking partner, CF, (who was acquainted with DD) is more than well aware of the importance of spending time with friends, having lost her dear friend, Claudia Ferrer, on February 1, 2018.

There are a series of four trees that are planted within Prospect Park (located in Brooklyn) near the entrance close to the Parkside subway stop on the Q train) that have been planted in Ms. Ferrer's honor. Last week, in my October 19th 2019 I visited those trees with CF.

In my blog entry, Saturday in the PARKS, published on for that day, I mentioned that I would be spending my morning in Brooklyn's Prospect Park and the afternoon in Central Park; and promised to follow-up on October 25th 2019, with the hope that a few of my observations will inspire you.

However, as I said in yesterday's blog entry, I've decided to split that content into a few entries, rather then make one lengthy posting. The aforementioned posting discusses an aspect of my October 19th walk in Central Park and tomorrow I will discuss other aspects of that Central Park walk.

In this entry, I am sharing my experience re my walk in Prospect Park.

I'm not so sure my observations and/or experiences have much meaning these days, but without further ado, please allow me to tell you something re my time in Brooklyn's main park.

As I said, four trees have been to honor planted Ms. Ferrer, whose daughter received generous funds for the planting of them. The donations came along with a plaque which is placed on a bench in front of the trees. It can be seen in the image directly below. 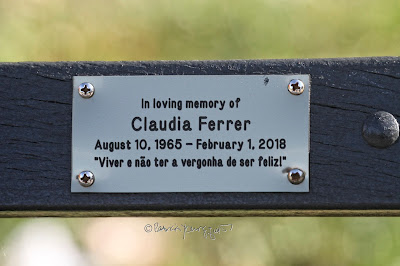 In the next picture, my friend CF is having a quiet prayerful moment in front of one of the four trees. 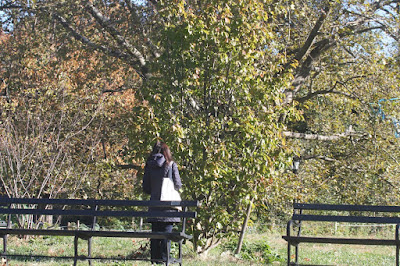 These "memory trees" face a body of water within Prospect Park and on this past Saturday, a number of  Mallard ducks as well as a number of flocks of Canadian Geese were enjoying a swim.

Additionally I saw a fast-moving Great Blue Heron (seen in my next series of photos which are mediocre by my standards) in the far distance. However, I didn't know the bird's ID at the time, because I wasn't camera ready as I was concentrating on the needs of my friend, not keeping my eye on the birdie. 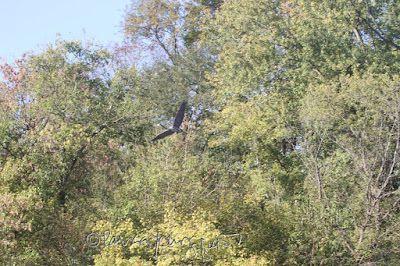 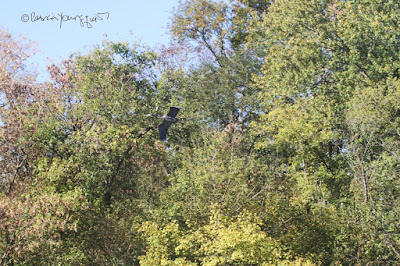 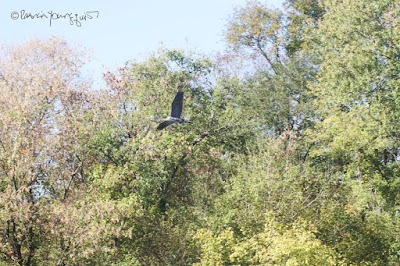 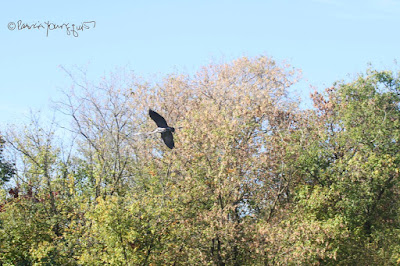 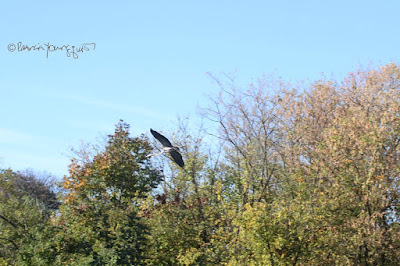 Good photograph or not, I can definitely imagine what that creature looked like as I've seen this avian variety on a number of occasions in Central Park. While I would love to have gotten a better picture of the one who I saw this past Saturday, I had gone to Prospect Park in support of my still-grieving friend, not to observe birds.

CF and I did not stay very long in Prospect Park but plan to return to Ferrer's trees on 2/1/2020, the second anniversary of her death. We are both grateful for the times we had with our respective friends  and also for the fact that we find ways to pay homage to them — informally and formally.

Rest in peace, our beloved friends...
Posted by The Last Leaf Gardener