Is he/she or isn't he/she an American Crow? ("Controversy" over this one's ID!) 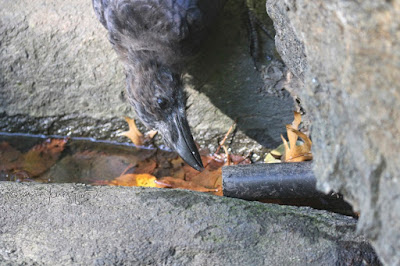 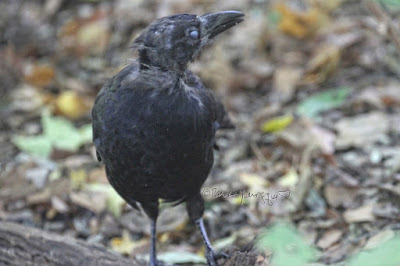 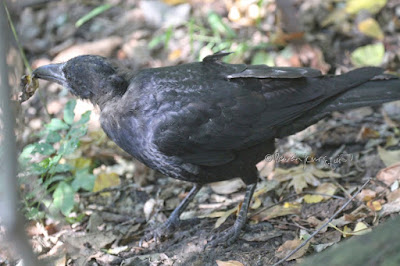 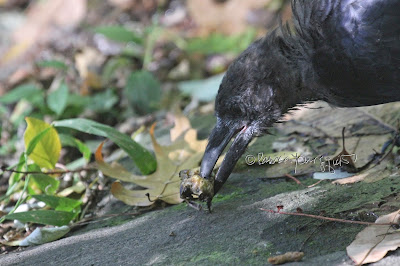 The photos posted atop this entry were taken in The Hallett Center. It is an area (within Central Park) that I visited this past Saturday afternoon when I was walking in the company of a couple who lives on the Eastside of NYC.

Last week, in my October 19th 2019 blog entry, Saturday in the PARKS, I mentioned that I would be spending my morning in Brooklyn's Prospect Park and the afternoon in Central Park; and promised to follow-up on October 25th 2019, re my park sightings for that day with the hope that a few of my observations will inspire you. Now I've decided to split that content into a few entries, rather then make one lengthy posting. How's that for Wednesday's Wisdom?

I'm not so sure my observations and/or experiences have much meaning these days, but without further ado, please allow me to tell you something re the ID of the bird featured here. He/she seems to be an American crow... but I only learned this after hearing the opinions of a number of bird experts who weighed in my question which I initially posted on Facebook (this past Sunday) using these pictures and stating the following:

I came across this creature while walking with A and F in the Hallett Nature Sanctuary (an area within Central Park) yesterday afternoon.

His/her beak size — and over all body size — had me wondering if I had seen a Common grackle (there were many of those in the area) or another bird type; perhaps even a type of crow.

WHAT is a birder to do when unsure?

She graciously took the time to reply to my question is posted below:

"Yes the beak looks thicker and heavier than your typical grackle, but crows are noticeably larger, like at least twice as large as a grackle. We’re there others like him around or was he with other grackles? Definitely in molt! Lol"

I informed AR that this guy/gal was in the company of many Common grackles and she had an idea:

"I’m not sure. Maybe he is one of the other two species of grackle that sometimes flock with common grackles, either the boat tailed or great tailed grackle. They are slightly larger with heavier beaks. Maybe!"

Upon reading her response I forwarded my ID question (via Messenger) to The Cornell Lab of Ornithology as well as The Raptor Trust (TWR) but since it is Sunday, they may not be staffed to address this question, but thankfully bird expert, R DeC PhD, responded. (See correspondence below.)

-----Original Message-----
From: Patricia Youngquist
Sent: Oct 20, 2019 12:22 PM
To: R DeC PhD
Subject: Seen in The Hallet: Maybe he/she is one of the other two species of grackle that sometimes flock with common grackles, either the boat tailed or great tailed grackle. They are slightly larger with heavier beaks?

ME: "Maybe he/she is one of the other two species of grackle that sometimes flock with common grackles, either the boat tailed or great tailed grackle. They are slightly larger with heavier beaks?"

Here's his response which gave me a good laugh:

On another note, Common grackles are featured in my book series, Words In Our Beak.

Amanda and I agreed with Dr. R. We believed I had seen a molting Common grackle. We then had a small exchange of ideas:

AR: "Funny how he answered! Yes, bird is molting, but I would never call him ratty I was looking at species maps, the great tailed grackle never makes it into your area, not even close, but the boat tailed grackle might be seen in NYC, you are coastal, and they inhabit the coastal areas in the east almost up to Maine."

Me: "I agree his answer IS funny! Ratty? Wonder how Dr R looks when he is between his personal hygiene and/ or grooming stages! Still... I'm glad he responded and as always am thankful when you do! Btw, I did research too and concur, it is possible to see a boat tailed grackle in my area. In any event, he/she was VERY ENTERTAINING!"

AR: "Definitely! Grackles are some of my favorites in rehab, such great personalities, and although some may think them ratty, I think they are beautiful."

Then Susan Ryan contributed to the conversation. Here's a "transcript" of our exchange determining this bird's correct ID:

AR: "That’s what Patricia thought, but he isn't big enough."

Me: "Susan Ryan, I thought so too, but his/her size is too small, although the beak size threw me off!"

Then yet another person identifying herself as BJK weighed in saying: "Has it occurred to anyone that this bird may not even be native, nor migrating, but en exotic that may have gotten out from a collection, and might need help? Possibly even similar to a Mynah?"

Soon after BJK's query came in I heard back from The Wild Bird Fund who said, "Hi Patricia, it’s hard to tell what the size of this bird is from the photos, but the feathers going partway down its very large bill make me think it’s a juvenile raven.  Perhaps post it in the NY birders group? Thanks, Catherine. P.S. Although crows have some feathers there too (and would be much more likely). If you post it elsewhere, try to describe the size so they can help. Good luck!"

The following day, TWR got back to me with their thought, "Looks like possibly a really scroungy Crow.  Beak is too heavy for a Grackle, I think.  Could be a Fish crow, which is generally smaller than Common Crow."

And AR had some thoughts re the bird being a Fish Crow: "Lolol. Wow, the crow ID won’t die!
Yes, they exist.  I still don’t think your guy is a crow ! They are in your hood too..."

After settling with the ID of a molting Common Grackle as an ID, I got an unexpected message from a woman named Stephanie G who is a follower of The Cornell Lab of Ornithology stating: "Boat Tailed Grackle. Great Tailed wouldn't be found in NY."

I acknowledged her reply with the following image and words. 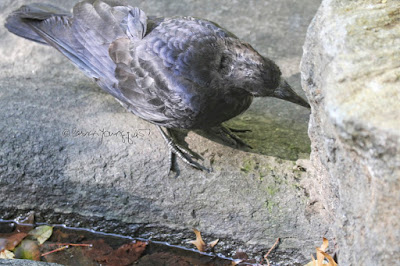 "Thanks for weighing in and yes I do now know that Great Tailed grackles are not found in NY and I've been leaning towards Boat Tailed, but do think his/her tail isn't long enough to meet that type's 'criteria.' The consensus seems to be he/she is molting but the long beak keeps making me veer between a molting CG and a Boat Tailed CG!"

Her reply? "Females have shorter tails. Your right it could be a Common..hard to tell for sure."

And mine: "Thanks for taking the time to weigh in again re my ''find.' It was truly a pleasure to watch him/her hide food under leaves (as a blue jay looked on from the tree tops). I had taken a couple who live on the Eastside to The Hallett and we were thoroughly entertained by this awesome creature!"

Then, just when I thought I had indeed seen a molting Common grackle, SG contacted me again, informing me, "Just looked again. That's an American Crow with that heavy thicker bill."

Thanking her with another picture (a copy is directly below) I exclaimed, "Surprised + pleased to hear from you again, SG! Thanks for time and attention with this bird ID. The bill is really throwing me (and other birders off). Aren't American crows much larger (body) than "my" bird discovery in The Hallett?" 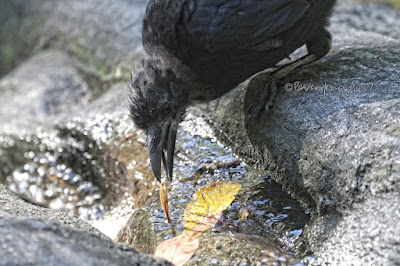 AR then informed me she'd have to see him side by side "with the grackles he was hanging with, for size comparison, but this photo has a bit of crow look to him. Crows usually hang in groups together too. But you said he was with grackles, maybe he lost his family?"

My reply (with a photo): "Yes he/she was in the same vicinity as grackles so perhaps he/she did lose the family. No other bird looking like this was in sight but a jay (as well as my companions and me) watched this "mystery" bird carry a large piece of bread that some careless passerby had probably thrown into the area." 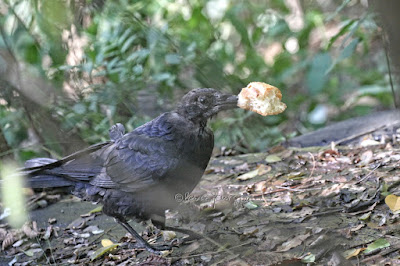 AR: "At least he was making a living on those tough streets!"

ME: "Hope I can do the same (make a living on these tough streets)!"

And there you have it, dear reader, the drawn out saga of ID-ing this bird, who for now we seem to concur is an American crow...

But I confess, I'm not positive about this and may have to live with the ambiguity as well as the realization that only this bird knows for sure, much like the unseen hairdresser in an old Lady Clairol commercial (posted below):