Friday Follow-Up: "Saturday in the Parks" 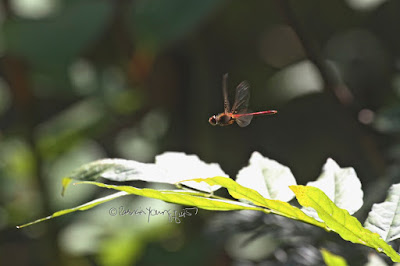 Hello dear reader, and welcome to my third and final follow-up to my 10-19-2019 blog entry, Saturday in the PARKS. As some of you may recall, in the aforementioned entry, I discussed the fact that that I would be spending part of my morning in Brooklyn's Prospect Park and then part of the afternoon in Manhattan's Central Park; and I promised to follow-up on October 25th 2019, with the hope that a few of my observations are inspiring to you.

However, as I said in this past Wednesday's blog entry, I've decided to split that content into a few (three) entries, rather then make one lengthy posting. The aforementioned posting discusses an aspect (an encounter with a bird whose ID determination caused a "controversy") of my October 19th walk in Central Park.

Then in yesterday's entry, I discussed my walk in Prospect Park and included a promise that I would talk about other aspects of my 10-19-2019 Central Park walk on Friday, October 25th 2019... so here I am to do just that, beginning with my sighting of a fast moving red dragonfly (seen in the picture atop this entry).

The creature was spending time within The Hallett Nature Sanctuary and you can see more photo-ops of this insect in the following series. 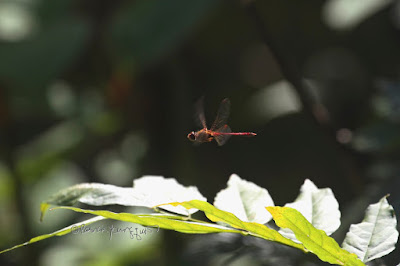 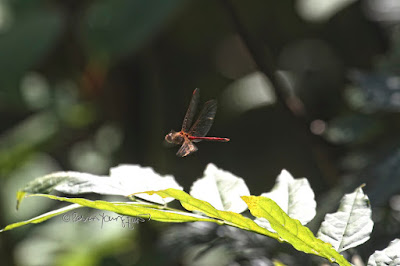 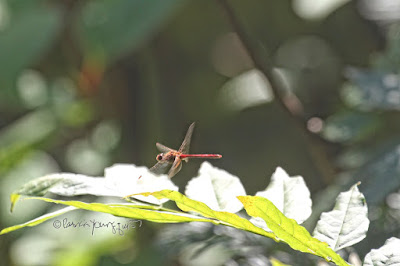 I had never seen a red dragonfly before. Moreover, I had never seen this type of insect within the Hallett Sanctuary. When ever I'd seen dragonflies in Central Park, they were in the vicinity of Turtle Pond, as I've mentioned in prior entries where I have included many photo-ops, including copies of the ones directly below.

Additionally, on one occasion, another dragonfly variety visited my garden to snack on one of my vines — who is known by the name Sweet Autumn Clematis — as seen in the following image.

This particular image is included with some interesting facts about the cardinal's relationship with dragonflies in volume one of my three volume book series, Words In Our Beak, and information re the Autumn Clematis is included in volume two of the series.

While we were there, we also saw the usual visitors to The Hallett including squirrels, American Robins, Blue Jays, Cardinals, Common Grackles and European starlings (all of the aforementioned birds are featured within selected volumes).
From the Hallett, my companions and I went to the deck above Turtle Pond to see if the cormorant that I've been posting about in a number of my recent blog entries was still hanging out (with turtles) either in the pond or atop one of the large rocks located there. I was happy to see (although I didn't take any pictures) that both the cormorant and turtles were soaking up the sun's rays.

Before heading home, we made a detour through The Ramble, and I was fortunate that one of my walking companions noticed a Winter Wren for I might've missed seeing this bird altogether.  His.her speed and size make him/her hard to spot and even harder to photograph, but I attempted, and my results can seen below. 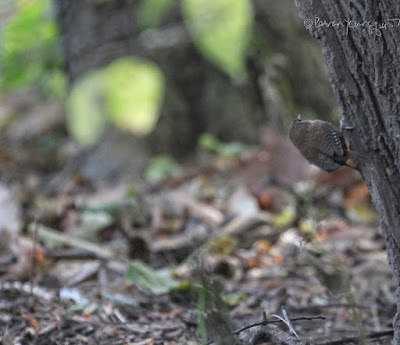 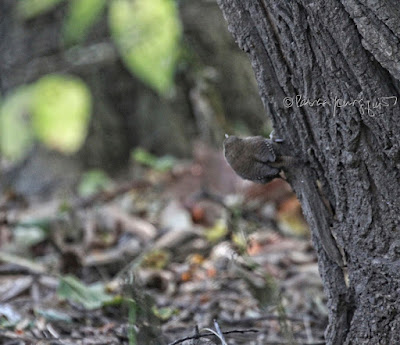 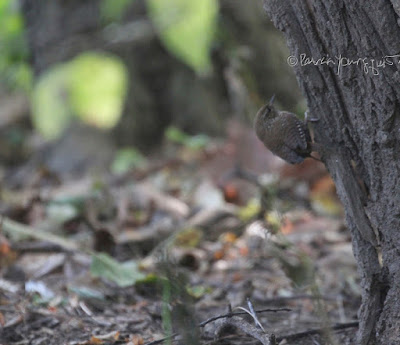 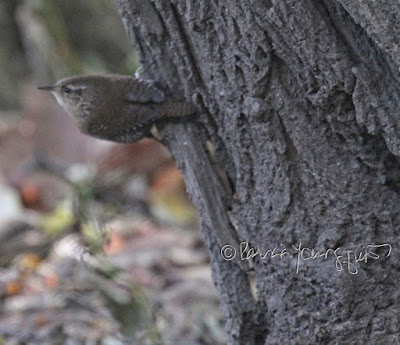 This little creature is a bird type I'd seen a few weeks prior while in area of Central Park known as The Pool. In a blog post where I discussed that encounter, I stated:

"The winter wren is one of North America’s smallest birds, kinglet-sized and rounded in shape like a small teapot, with a short stubby tail for a spout. Its bill is short and thin. Dark brown feathers suit its skulking habits, for this is a bird that likes to hide among the leaf litter or crawl into dark crevices in rocks or the cavities created by fallen logs. (Its scientific name, Troglodytes, means 'cave dweller.') Often found along stream banks or thick roadside tangles, this wren may pass unnoticed much of the time unless you are attuned to its double-click chip note. In the breeding season, however, males will often establish a perch on top of a snag and remain there for long periods as they sing their glorious, bubbly song."

As for my inability to photograph this avian beauty to my liking, I am once again reminded of the musings of E.B. White.

For when a missed photo-opportunity like this occurs, I try to console myself with the wisdom that E.B. White spoke of in his essay, "Remembrance is Sufficient."

An excerpt from this can be found below:

In any event, heeding White's aunt's wise words prevented me from going through a litany of would've-shoulv'e-couldv'es re not getting the Winter Wren's photo! I was even able to focus on how special it was to see him /her in the park and allow my remembrance of seeing this creature (while in the company of two lovely walking companions) to be sufficient.

And there you have it, dear reader, my final follow-up from last Saturday, a day where once again my "Saturday in the Park," or in this instance my Saturday in the parks, proved to be, as a lyric line from the song goes, "a real celebration..."
Posted by The Last Leaf Gardener