This past Thursday in my posting here on Blogger, I discussed the fact that a statue of Daniel Webster near the West Seventy Second entrance Central Park is a favorite spot for house sparrows to build their nests.

Within that entry I included a couple of photos from the web and last night I was able to take my own pictures of the statue, some include the monument "holding" nesting material (as seen in the images atop this entry) others include a lone house sparrow alighting on the nesting material that Mr. Webster is holding; as seen directly below.


The inscription at the base of the state features a quotation from Daniel Webster's famous senate (1/26/1830) speech: “Liberty and Union, now and forever, one and inseparable!” 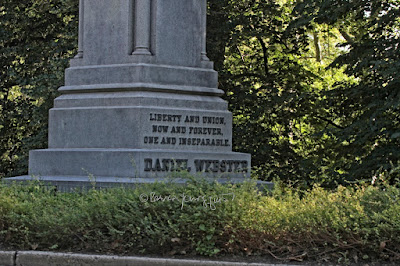 When I was photographing a sparrow enjoying herself in the arms of Mr. Webster, various pedi-cabs filled with tourists stopped their vehicle near the statue to announce that Mr. Webster was the "inventor" of the dictionary, which is totally fake news.

The name associated with the dictionary is Merriam Webster, not Daniel Webster. As a Wikipedia web-page proclaims "in 1807 Merriam Webster started two decades of intensive work to expand his publication into a fully comprehensive dictionary, An American Dictionary of the English Language. To help him trace the etymology of words, Webster learned 26 languages. Webster hoped to standardize American speech, since Americans in different parts of the country used somewhat different vocabularies and spelled, pronounced, and used words differently.

Webster completed his dictionary during his year abroad in 1825 in Paris, and at the University of Cambridge. His 1820s book contained 70,000 words, of which about 12,000 had never appeared in a dictionary before. As a spelling reformer, Webster believed that English spelling rules were unnecessarily complex, so his dictionary introduced American English spellings, replacing colour with color, waggon with wagon, and centre with center. He also added American words, including skunk and squash, that did not appear in British dictionaries. At the age of 70 in 1828, Webster published his dictionary; it sold poorly, with only 2,500 copies, and put him in debt. However, in 1840, he published the second edition in two volumes with much greater success."

So there you have it dear reader, the Webster statue in Central Park which provides a respite to many house sparrows has nothing to do with the founder of a dictionary.

This is something the ubiquitous house sparrow could have likely told passersby but it may very well be that it is something you'll never hear from a pedi-cab driver in Central Park.

Just an aside: This bird type is featured in my three volume series, Words In Our Beak, which is available wherever book are sold.