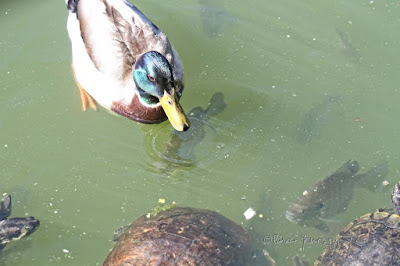 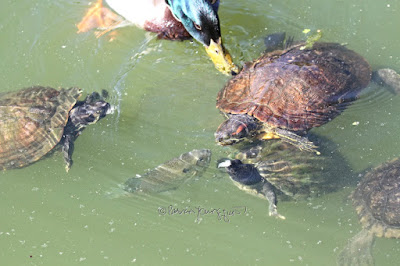 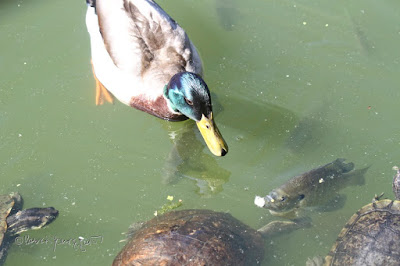 This past Tuesday I published an entry here on Blogger that featured a Mallard swimming with turtles in the area of Central Park known as Turtle Pond. I'd like to use this throwback Thursday to refer to that posting by adding this Mallard seemed to enjoy being in  mixed company of turtles and fish, as evidenced by the pictures atop this entry, which I took this past Saturday when I took a walk in the park.

On that morning walk I also saw fish from a vantage point at Wagner Cove, an area not too a from Turtle Pond. Moreover, when exiting the park at West Seventy Second Street, my friend (CF) pointed out a huge bird's nest, which can be seen in the following image.


As you can see, a pair of house sparrows are aligning the structure (which is near a statue of  Daniel Webster) that supports the nest. My curiosity about this nest prompted to do an Internet search and I learned that DW's statue is a popular place for nest building. The next set of photos (which are from the web) corroborate this fact.

The text accompanying the latter photo, which was evidently submitted by Helen J, states "A great statue of the famous politician Daniel Webster is larger than life. It sits near the West 72nd St. entrance to Central Park. Every year sparrows have been nesting on the bend in his elbow. It makes me smile to see Mr. Webster serving as a support for at least one but often two nests."

I adore house sparrows and have often recalled Henry David Thoreau's quote upon my seeing them:

“I once had a sparrow alight upon my shoulder for a moment, while I was hoeing in a village garden, and I felt that I was more distinguished by that circumstance than I should have been by any epaulet I could have worn.”

Seeing sparrows cozying up in the arms of Webster's statue, I imagine that he too would feel "more distinguished by that circumstance than I should have been by any epaulet I could have worn.”

This bird type is featured in my book series, Words In Our Beak.


As for the other animals (fish, Mallards and turtles) mentioned in this posting they have been featured in entries on my blog. Additionally, as you may know, dear reader, the shells of turtles are the inspiration for my kaleidoscopic photographic print titled Turtle Pond, which is pictured below...


... and is available in many sizes via Fine Art America (or FAA) who can print wall art on an array of surfaces (wood, canvas, acrylic, metal and more) as well as on items for the home (including pillows and duvet covers), plus FAA can print images on for personal use (such as tote bags and greeting cards).
Posted by The Last Leaf Gardener