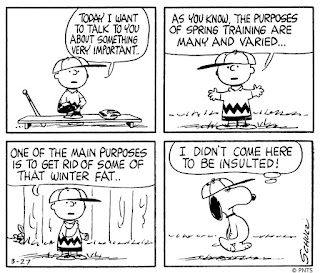 According to the FB Home Page for the Charles M. Schulz Museum, where the PEANUTS comic strip atop this entry is from, Spring Training (for baseball) began yesterday. I confess I don't follow the sport now since Julia V has died in 2002 (seven years before my first post here on Blogger) Julia was a homebound woman who lived on the UWS and I visited her on a regular basis through a program sponsored by The Church of the Blessed Sacrament.

Julia was a baseball fan (understatement), therefore, in order to have something to talk about a topic she would enjoy I listened to coverage of the sport on the radio, followed the newspaper headlines and watch a few games with her. I didn't keep with the the sport after she passed, but, I do know that a few teams have a bird as their mascot.

For example, Toronto's team (The Toronto Blue Jays) employs the blue jay as their's. A picture of this bird variety can be seen in the photo (taken in my garden) directly below...


.. and Saint Louis's team as you may know has a Northern cardinal as their mascot.

One such bird can be seen below in a photo that I took in Central Park.


The fact that The Saint Louis Cardinal's use a male cardinal as opposed to the female variety has been a bone of contention for Cam, the female cardinal pictured below where she is conversing with her husband...


....and probably complaining about "the injustice" she perceives this to be. As you may know (if you follow this blog), Cam is quite an opinionated cardinal, especially on issues  of gender, and she has made her concerns known in the book series, Words In Our Beak.


Cam's bird type's gender is not the only one to be passed in a selection for a given baseball team's mascot, The Baltimore  Orioles have a male oriole as theirs, which can be a thorn in the side of Emily, the female oriole pictured below...


...where she is expressing her feelings while alighting on a bird feeder in my garden.

However, even though baseball teams may have passed on having female bird types as their rep; they are featured within the book series, as are other birds who are not reps for a baseball team (including the American Goldfinch, the American kestrel, American Oystercatchers, and the American Robin;  as well as Canadian Geese, Chickadees, Common Grackles, Cormorants, Dark-eyed Juncoes, Downy Woodpeckers, the European starling family, House Finches, House Sparrows, Hummingbirds, Mourning Doves, a female Muscovy duck, Northern mockingbirds, Pigeons, a lone Red-Bellied Woodpecker, Red-Tailed Hawks, Wilson (a Rose-Breasted Grosbeak), members of the Tufted-Titmouse family, White-Breasted NutHatches, and White-throated Sparrows.


The goal of these books is to open readers to a simple understanding of the winged world and their environment. Set in a rooftop urban garden (mine) in New York City, my story is told in the voice of Cam, a female cardinal, who visits it. Words In Our Beak is directed to children and adults who are curious about birds, and want to learn about them from a unique perspective. The book includes hundreds of images of flora and fauna, links to movies, as well as to informative narratives that have been created by the author.

Here is the purchase info for the series: