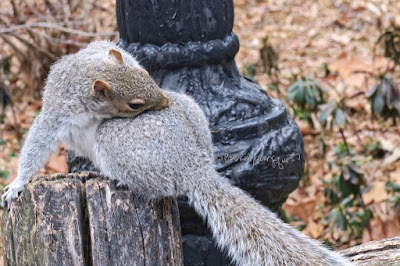 It is has been one month since the official date for 2019's Squirrel Appreciation Day occurred but it's not necessary to wait for such a holiday or for it to be Squirrel Awareness Month, which occurs in October) to appreciate this animal! These creatures are fascinating to observe at any time of the year.

The picture atop this entry (which was taken a few weeks ago on February fourth), features a squirrel grooming while spending time in Central Park. According to many webpages including one for The Cincinnati Nature center, "Squirrels may groom themselves or each other to keep their fur clean. Grooming can include rubbing, scratching, licking or lightly gnawing. Social grooming occurs most often between siblings."

There is a lot of information on the Internet re these animals and the following facts regarding them are from a page titled Mammal Fact but the photos supporting that page's observations are all are all mine. They were all taken in NYC within Central Park or within Riverside Park.

"The squirrel’s muscular hind legs help it jump distances of twenty feet into the air," claims the aforementioned web page which other sources confirm. I have never seen them jump those distances, but I have observed their hind legs being muscular as evidenced in the next pictures. 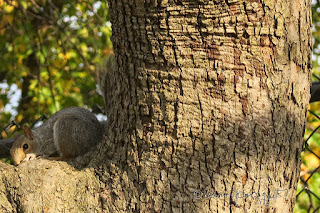 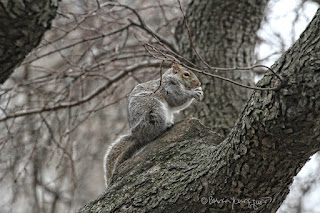 This page also points out, "A squirrel’s bushy tail actually serves a couple of purposes. For one, it helps them balance when they are walking along branches."

It certainly seems like their tails would help them balance when walking on branches... 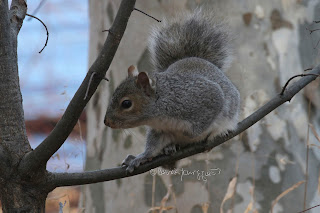 ... and this seems to be the case when they walk on park benches as seen in my next picture. 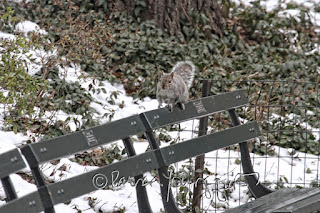 This also seems to be the case when a squirrel balances him/herself on a picket fence.. 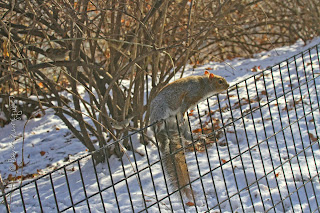 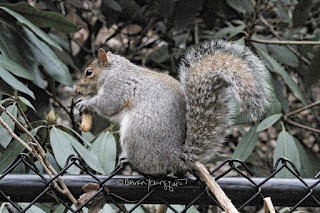 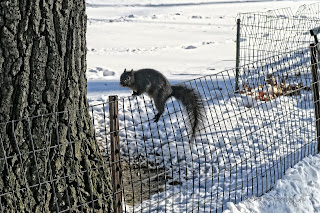 Moreover, this page explains, "A squirrel’s eyes are positioned so they can see behind them without turning their heads;" which is evidently the case with the squirrel seen here who I came upon, I guess he would've seen me had I come up behind him since this is the case with this creature's eyes. 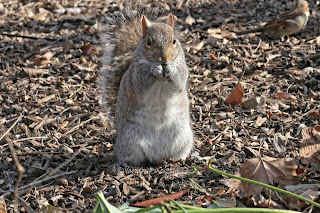 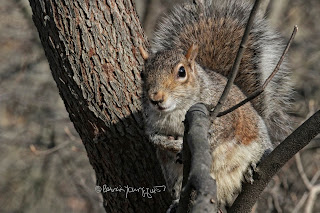 That must be convenient and eliminate the need for a rear view mirror!

Apparently, "squirrels have very sharp teeth that continue to grow during their lifetime. They use these sharp teeth to crack nuts..." as the one featured in the next set of photos is doing. 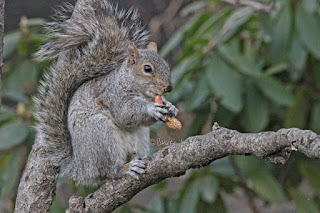 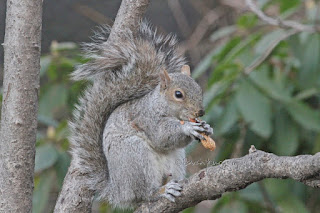 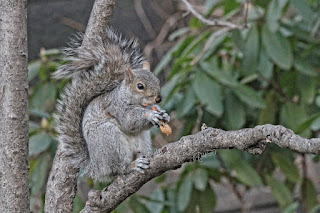 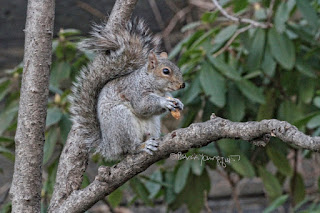 A few more facts about them include these: when they are born, they are blind...Ruling out attacks by predators, a squirrel can live between 10 and 12 years in the wild... The main predators of squirrels include owls, opossums, foxes, hawks and wildcats....Squirrels talk to each other with a series of chirps. They can communicate feelings like laughter as well as alert other squirrels to danger. The chirps are used in combination with their tail movements for a variety of signals... "

(AND) "Before hiding food for the winter, a squirrel will often rub it on its face. This puts their scent on the food so they can easily find it later. They can find it under a foot of snow if it has their scent on it...," which is probably how the squirrel seen in the next two photos found his/her food during, "Toby," a Nor' Easter that descended upon NYC on the first day of spring in 2018! 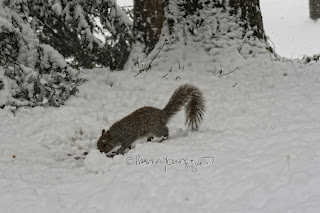 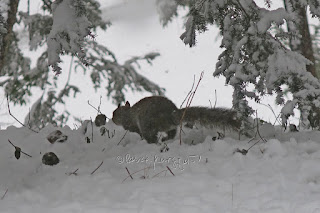 So...there you have it dear reader, a few more things to observe when you encounter this animal and hopefully now you won't wait until Squirrel Awareness Month or Squirrel Appreciation Day to enjoy these somewhat whimsical creatures!
Posted by The Last Leaf Gardener