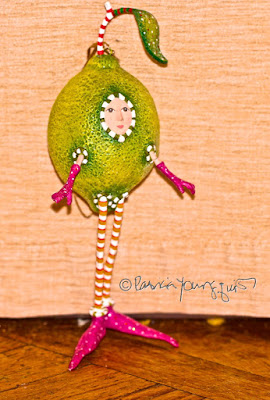 Remembering January the eighteenth as being a day in which a writer died as well as being the birthday (albeit long ago in the 1700's) of someone, who has died but whose book still provides great value to writers.

The writer who died on this day (in 1936) is Rudyard Kipling. As you undoubtedly realize dear reader, Kipling is known for many literary works, including children's books (such as The Jungle Book and Just So stories) and also for poems, (such as IF and The Land).

When I see my lime-themed Christmas ornament (featured in the image atop this entry), I think of a few lines from The Land.


"..... Well could Ogier work his war-boat—well could Ogier wield his brand—
Much he knew of foaming waters—not so much of farming land.
So he called to him a Hobden of the old unaltered blood,
Saying: “What about that River-piece, she doesn’t look no good?”

And that aged Hobden answered: ’Tain’t for me to interfere,
But I’ve known that bit o’ meadow now for five and fifty year.
Have it jest as you’ve a mind to, but I’ve proved it time on time,
If you want to change her nature you have got to give her lime!..'"

I've recently learned that Kipling is known to have said, "Words are, of course, the most powerful drug used by mankind."

Kipling, in my mind, is certainly spot on in saying that words are a powerful drug and I'm certain Cam (the cardinal who is the story teller in my Words In Our Beak series) would agree.

She is featured in picture directly below, where she appears to be eyeing my WRITERS BLOCK PENCIL. 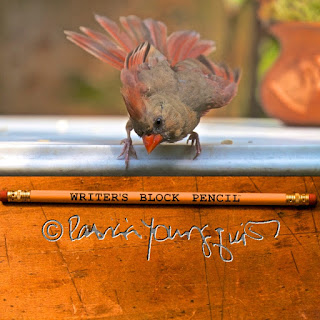 Writers block is an awful thing but sometimes it can be remedied with a thesaurus. I'm very grateful to have had access to one when I was working on these books with Cam and also find it a valuable reference in writing  my blog and social media entries. Therefore, it would be remiss of me not to give a nod to Mr. Rodet on this day of January 18th because he was born on it in 1779. Among his many accomplishments, Rodet created the thesaurus. Many people, to commemorate Mr. Rodet's feat refer to January 18th as Thesaurus Day, which is something I discussed in an entry here Blogger on that was published in 2011.

And there you have it for today, dear reader, a mini commemoration to a man who died on this day, as well as to a man who was born on this day. Both shared a deep appreciation for words, as do Cam and I, evidenced by our title, Words In Our Beak.

Here's the purchase info re our book series: