Welcome to my 105th "episode" of Tuesday's Truths, dear reader!

A few weeks ago when I was in Central Park to catch another glimpse of the now famous Mandarin duck, I was successful in my endeavor to have another look at him, and he seemed to be doing the same thing as evidenced in the photo atop this entry...

... as well as in the ones directly below.


But the Mandarin duck was certainly not the only duck to be swimming in the pond. There were an array of others "doing laps" too; including a female Wood duck (who can be seen in the next pictures, where she is swimming in close proximity to a female Mallard; and was id-ed for me by Deborah Allen). 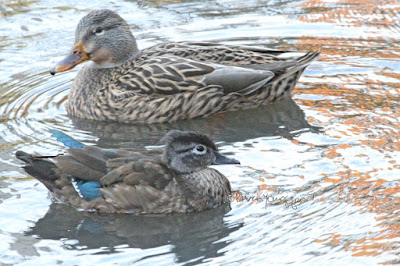 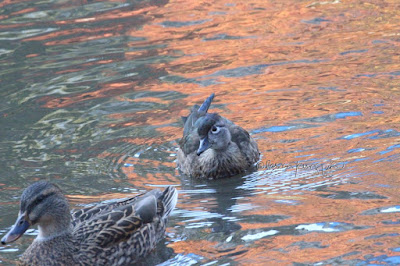 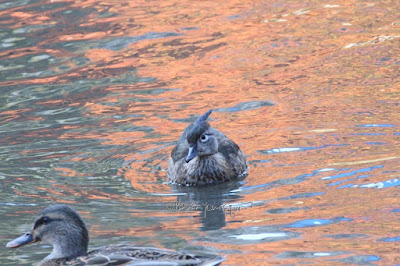 Wikipedia states that "the wood duck is a medium-sized perching duck. A typical adult is from 47 to 54 cm (19 to 21 in) in length with a wingspan of between 66 to 73 cm (26 to 29 in). This is about three-quarters of the length of an adult mallard. It shares its genus with the Asian Mandarin duck."

They go on to say "adult male has distinctive multicolored iridescent plumage and red eyes, with a distinctive white flare down the neck."

I have seen the male Wood duck (who is pictured below where he is swimming near to the Mandarin) on a number of occasions. 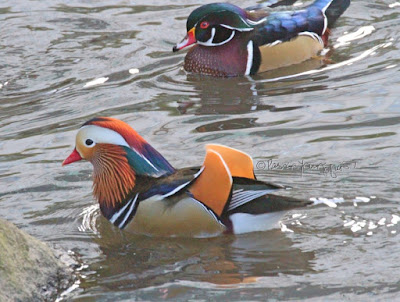 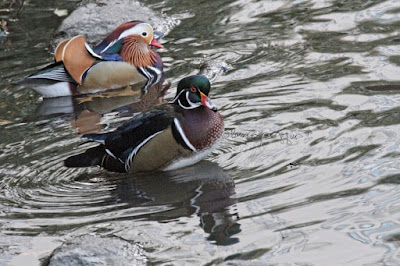 Re the female Wood duck's plumage, the aforementioned Wiki Page states the following:

"The female, less colorful, has a white eye-ring and a whitish throat," which is evidenced in the next set of photos that I took of her. 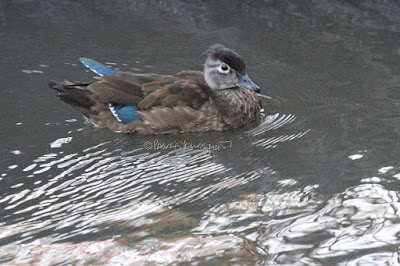 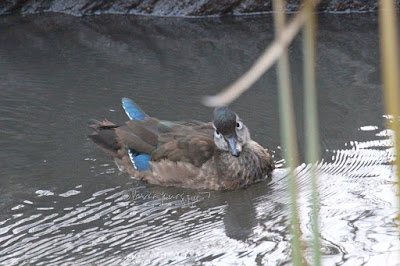 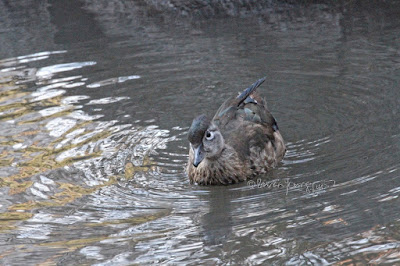 Many of the references I read refer to the female Wood duck's plumage as having a "dull coloring," which instantly made me think of Cam, a female cardinal who is the cover girl as well as the story teller in my three volume book series, Words In Our Beak.


Those familiar with these books will recall that in the first volume, Cam confesses, “folks often dismiss me due to  — what some ornithologists have called — ‘dull coloring,’ and focus on the bright red males (cardinals).”

Judging from the expression on the female Wood duck's face (seen in the next pic)... 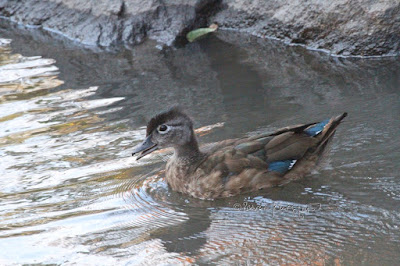 ...it seems like Cam, she'd have a thing or two to say about being referred to as dull.

In any event, if you'd like to purchase my books, information on how to do so is posted at the conclusion of this entry.

I also have a collection of bird themed greeting cards that are based on pictures included in the book series, as seen in the screen shot directly below.

And I have a collection of sixteen different Mandridan duck images that can be printed on to greeting cards as seen in the following photo of a sample.

All of these cards are available via Fine Art America. (FAA). Here's the link to my pages on FAA:
https://bit.ly/2PZzVnO

FAA can also print my pictures of the Mandarin duck on an array of surfaces for wall art; including acrylic, canvas, posters, standard print paper, wood; as well as metal. The latter is pictured below.

Additionally, the images in my Mandarin collection can be printed on items for home decor. A few examples can be seen in the next set of pictures.


Moreover, FAA can print the photos on tote bags. One example can be seen below.


As of now I don't have any pictures on FAA that feature the Wood duck (male or female), but stay tuned as I may consider doing that.

Meanwhile, I'll conclude with the purchasing info — as promised — for my Words In Our Beak book series: