"We are all just passin' through..." (Wednesday's Wisdom) 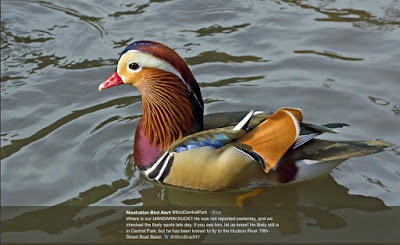 The image atop this entry is a screenshot of a tweet from Manhattan Bird Alert. Accompanying the image of this Mandarin duck, (who has been making headlines as I've discussed here on Blogger) their text states: Where is our MANDARIN DUCK? He was not reported yesterday, and we checked the likely spots late day. If you see him, let us know! He likely still is in Central Park, but he has been known to fly to the Hudson River 79th-Street Boat Basin.

Hope that Manhattan Bird Alert is correct! I not only hope the creature is doing well; I would more than welcome a chance to see this beauty again either in Central Park or at the 79th-Street Boat Basin on the Hudson River.

Like the author of the tweet, I've also heard (through very reliable sources who do not report fake news) that this Mandarin did spent time near the Boat Basin and I was also told he got along very well with Jewel, the Muscovy duck (seen in the picture below) who lives there year round.


Jewel, as some of you may know, is featured in volume three of my book series, Words In Our Beak, and that I have announced that I will be discussing her impact on my life when I give my talk at NYSEC (New York Society for Ethical Culture) on November 26, 2018.

Later today I may head to an area of the Boat Basin where the Mandarin was once seen and where Jewel spends her time.

However, if I don't get the chance to do that, or if I do return there and the Mandarin is not around the area and he cannot be found in Central Park, I will try to treasure moments I captured in my mind and on camera (some of which can be seen in the next set of pictures) re the media-plagued duck and keep in mind the wisdom of the beloved author's (E.B. White) aunt:


Other words of wisdom that I should keep in mind should I not seen the Mandarin duck again are those spoken to me by a wise man who lives in my hood on the UWS after he heard my reaction to the sudden "disappearance" of a lone Rose-Breasted Grosbeak who visited my rooftop garden back in 2013.

A couple pictures (from 2013) of "my" visiting grosbeak, who I ultimately named Wilson, are posted below.

Wilson came very unexpectedly to my place, just as the Mandarin duck did at the Hudson River and Central Park. And like all the folks who were mesmerized (seen in the next image which has been included in many of my cyber venues including this one) by the Mandarin... 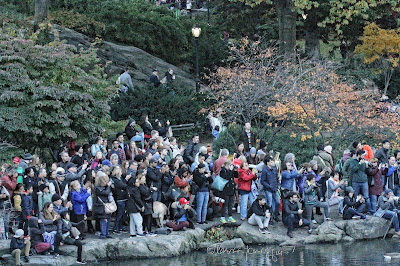 ... I was awestruck by Wilson; as evidenced by the pictures included in this blog post.

Wilson was at my place for a number of days as is the case with the Mandarin in NYC (who may still be here) and then, one day, Wilson was gone — leaving without a trace!

I felt such a loss and when I told the wise man in my hood about my feelings of loss, I stated, "I guess the grosbeak was just passing through...

Hopefully, the Mandarin is not just passing through.

More importantly, hopefully he is safe wherever he may be.

In any event, many of those who were fortunate to see this duck may have to tell themselves (should they not see him again), "Remembrance is sufficient of the beauty we have seen."

Meanwhile, on another  note, Jewel's bird type and Wilson himself are included in volume three of my book series!
----------