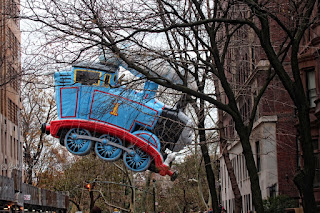 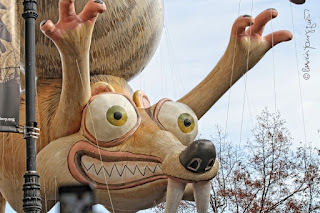 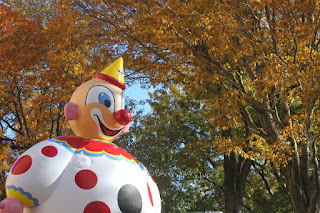 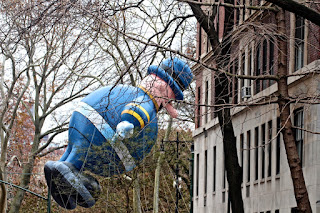 On this Thanksgiving Day of 2018, I can hear the bands from Macy's Parade through my window, but have not gone outside to see it. The temperatures are some of the lowest on record for this day, and the wind gusts are abnormally high, which means the Macy's Balloons will be flying low to the ground, and not as easy to see, since people stand on ladders and put toddlers on their shoulders. 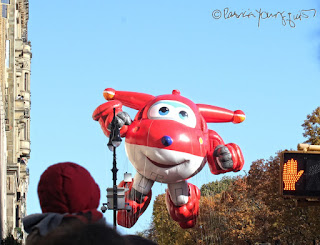 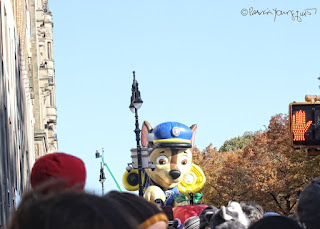 I'm not concerned re not seeing the balloons today, for I've seen them over the course of many years as they made their way down Central Park West ...

... as evidenced by a few of the images included within this posting... 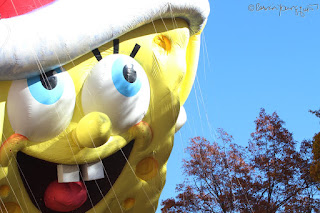 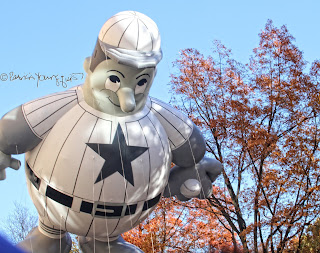 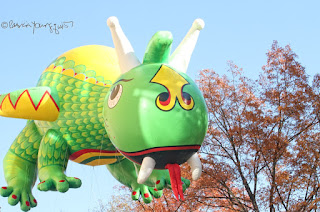 ... which means I can console myself with the wisdom of a quotation that E.B. White attributed to his elderly relative: "Remembrance is sufficient for the beauty for have seen."

Besides I'm feeling a little melancholy re memories of the day of November 22nd: 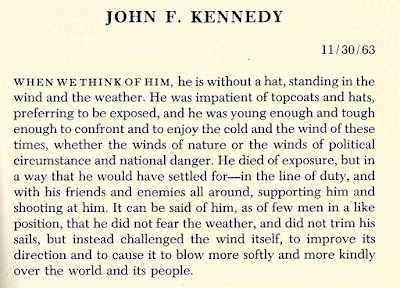 I have written about President Kennedy in a number of posts here Blogger, dear reader, and you may reference them by clicking here.

And I'm also feeling melancholy on this day, of November 22nd, re another event that occurred (in 1995), as that is the date that my father spoke his last words, into a tape-recorder from his hospital bed, saying, "the doctor hoped to have him out of the hospital the Monday after Thanksgiving," which fell on November the twenty-seventh, just as it does this year.

However, the doctor did not have my father out of the hospital on "the Monday after Thanksgiving," as he had hoped. Instead, he took a turn for the worse, before succumbing to death by septic shock eight days later, on November 30, 1995.

My father must have sensed death was near, and he took the opportunity to say a few things. His very short tape is included in this posting, and if you decide to listen to it, dear reader, you can click on "play bar " below the image of the cassette pictured here.

FYI, it may take a few seconds before you hear any sound.

While it's true that a good cure for beating a melancholy feeling is to get out and about, I needed to stay put for another reason, my upcoming presentation at The New York Ethical Culture Society (NYSCE) is now just a few days away (November 26th 2018)...

... and I'm fighting the onset the persistent of a head-cold as well as a sore throat; which is the main reason I'm staying hunkered down on this Thanksgiving Day: I certainly don't want to be feeling ill on that day!

And, I have a confession to make, I'm not a big fan of Thanksgiving dinners! I don't eat meat, don't live to eat, and my childhood memories of the day are not good.... 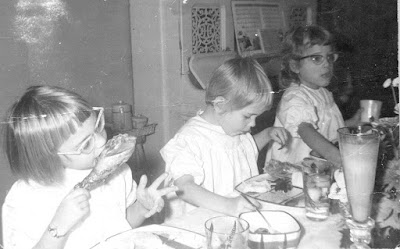 I'm the one on the right in this photo with a worried look on my face (my parents were probably fighting for they separated and ultimately divorced a few months after this picture was taken).

Some of the drama re family life (which happens to all) is covered in my short story, Dinner at Dad's.

But, the idea of a holiday dedicated to giving thanks is appealing and is the inspiration for one of my award winning black and white photographs (seen in the next picture).

This picture is included in the Black and White Gallery of my web-site, patriciayoungquist.com, which was designed by Chris Deatherage, who is the editor and formatter of my three volume book series Words In Our Beak.*

Another gallery on my web-site holds my kaleidoscopic images which are now also within my collections on Fine Art America (FAA).

By the way, I've just received a notification from FAA that starting today, 11-22-2018 through midnight 11-26-2018 EST, FAA is offering free shipping to anyone in the USA who purchases products they create using my photos.

They are printing a few images from my Words In Our Beak book series on greeting cards (a few examples can be seen in images below).


As you may recall, FAA is the organization who is rendering a certain number of my pictures (10 as of now) of the Mandarin duck (as well as pictures from my kaleidoscopic collection — 12) on to various surfaces (including acrylic, canvas, metal, poster-paper, and wood) for wall art.

Additionally, they are printing my Mandarin duck and kaleidoscopic pictures on items for home decor (including throw pillows, duvet covers and shower curtains) as well as items for personal use such as tote-bags and spiral notebooks.


I've only included a few samples here, so I recommend that you visit my FAA collections to see the breadth of choices.

As we all know, many holidays will soon to be here, and no matter which ones you celebrate, you are sure to find something to give to those near and dear to you within my collections on FAA; but I urge you to look ASAP while their free shipping offer lasts.