My talk/presentation at NYSEC is in 2 WKs! Theo plans to attend! 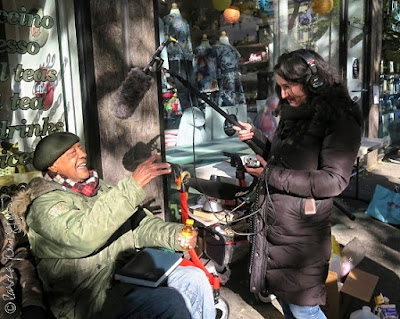 Yesterday I was invited to attend an informal event for a man named Theo who lives in my hood, he can be seen in the image atop this entry where he is being interviewed for a documentary film being made about him.

I was also interviewed by the filmmaker as someone told her about an encounter that I had with Theo a little over five years ago, an encounter which I wrote about this past Wednesday here on Blogger where I described that what happened was this: A rose-breasted grosbeak (who I ultimately named Wilson) came very unexpectedly to my rooftop garden....


... just as the Mandarin duck recently did at the Hudson River and Central Park.

This duck can be seen swimming in a Central Park pond near 59th Street in the following photo (by the way this picture along with others (ten total) is available in many formats via Fine Art America, here's the link to my gallery within their website.


And like all the folks who were mesmerized by the duck (including me), I was mesmerized by "my" visiting grosbeak who spent a few days at my and then, one day, Wilson was gone — leaving without a trace!

I felt such a loss and when I told Theo about my feelings of loss, I stated, "I guess the grosbeak was just passing through..."

Folks have been moved by my story re Theo and wanted to include it in his documentary which is why I was interviewed.

Wilson, who is the grosbeak I am speaking about in this entry is referenced in volumes one and two of my Words In Our Beak book series.

But in volume three, he has his own "chapter" and this fact along with pictures from the book is expected to be included in Theo's documentary!

And I'm honored to say the way, Theo says he plans to attend my upcoming talk/lecture at NYSEC (New York Society for Ethical Culture) which is scheduled to take place two weeks from today.

I've included an image of the ad (below) for this event in this posting, but the info may be difficult to read so here's a link to that info. 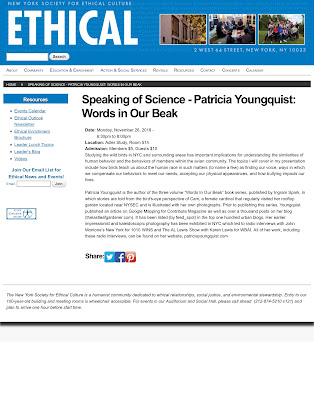 Hope to see you at this event, dear reader. Meanwhile, here's the purchase info re my book series: