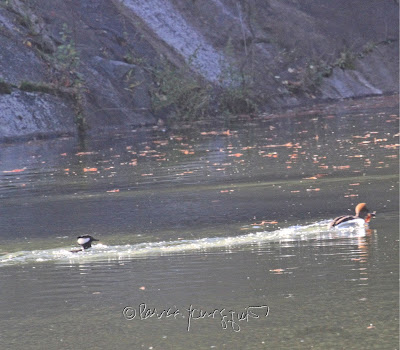 This past Sunday when I was looking in the waters of Turtle Pond, I observed a never before seen by me bird type, a pair of Hooded Mergansers. This was my sixteenth new encounter (in this Year of the Bird) with avian creatures whom I've never seen before.

According to a number of sources, including Wikipedia, where a page states, "The hooded merganser (Lophodytes cucullatus) is a species of small duck. It is the only extant species in the genus Lophodytes. The genus name derives from the Greek language: lophos meaning 'crest', and dutes meaning diver... both sexes have crests that they can raise or lower, and the breeding plumage of the male is handsomely patterned and colored. The hooded merganser has a sawbill but is not classified as a typical merganser. Hooded mergansers are the second smallest species of merganser, with only the smew of Europe and Asia being smaller, and it also is the only merganser whose native habitat is restricted to North America."

I have a long lens on my camera, but not long enough to get great pictures of the male (black on head) + female (brown on head)! Still I did enjoy seeing them swimming in Turtle Pond and you can see them in the picture atop this post.

Turtle Pond has been such an inspiration to me as evidenced by my kaleidoscopic photograph of the place;


which is now available in an array of formats for wall art (including canvas)...

Information re my kaleidoscopic images being rendered in these ways is available within my pages on Fine Art America's website which you can access by clicking here.

As for the Hooded Mergansers, I did manage to get another picture of the male when he was swimming in Turtle Pond near a pair of Canadian geese... 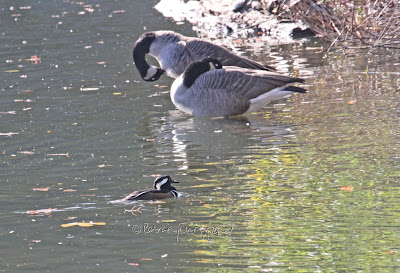 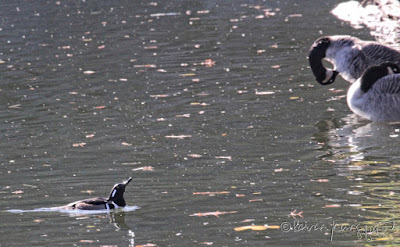 But again my lens not long enough to get great pictures of the fast swimmer. I certainly hope that I get another opportunity to see this bird type again and to get better pictures, but in the meantime, I'll once again turn to the wisdom of E.B. White's relative who evidently once told him, "... remembrance is sufficient of the beauty we have seen," a quotation which I've included in prior posts here on Blogger.