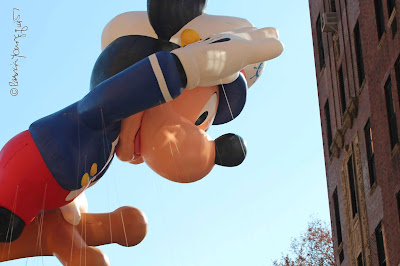 It is Mickey Mouse's 90th birthday today (having been born on 11-18-1928). And in 1934, when he was only six years old he appeared in the Macy's Thanksgiving Day Parade, "making him the third pop-culture character to have a licensed balloon in the parade. This balloon was 40 feet high, 26 feet wide, and required 25 handlers...

... A second balloon, which was slightly more colorful, was created and test flighted in 1971 and was originally supposed to debut that year to celebrate the opening of the Walt Disney World resort in Florida, but due to the weather all balloons had to be grounded, and so it debuted in 1972, appearing alongside his pal Donald Duck. 1935 and 1972 are the only years in the parades history where Donald Duck and Mickey Mouse both appeared in the parade together as balloons. The balloon continued to be used until after the 1983 parade...

... After 17 years of absence, Mickey returned in 2000 with a "Bandleader" balloon, which led that year's balloon lineup. This balloon did not return after that year...

...Several years later, a fourth balloon of Mickey was made, depicting him as a sailor; it debuted in 2009 to celebrate the announcement of the Disney Dream and Disney Fantasy cruise ships. This new Mickey was retired in 2012, as both ships had set sail by that time."

For  your information, dear reader, the image you see atop this blog posting is of Mickey rendered as a balloon was taken just before he retired in 2012. As you can see, he peers into windows!
This is the case for a number of the balloons; and it is also the case with a number of birds, especially, cardinal, as evidenced here in the next set of pictures.


These images along with a "back story" re cardinals looking into windows is included in the first of my book series, Words In Our Beak. Purchase info for this book and its subsequent volumes is posted below: