Thursday's Testimony: Plastics are NOT for the birds (or for any other living creature)...

The comic strip atop this entry was in my inbox today and upon seeing it, I was instantly reminded of a couple of seagulls whom I've seen "collecting plastics" on Long Beach. A couple of my images featuring this disturbing scenario are posted directly below. 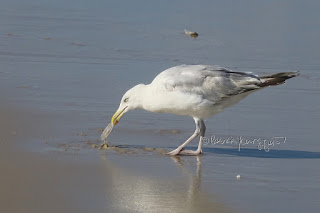 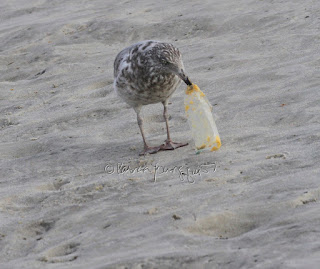 It never ceases to amaze me how people litter (for surely no other creature is leaving plastics behind).
But my words on that subject, as well as any words used in reporting on the truisms and/or dangers regarding littering and its consequences (especially ones related to plastics), are beyond any character limit in blog entries or social media platforms.

What I can do when I see a creature trying to eat plastic, is to attempt to deter him/her from that activity and if he/she subsequently drops the plastic, I can dispose of it properly.

Fortunately, there are numerous numbers of people who care about this issue and who work tirelessly to raise awareness re littering as well raise awareness of the need to be plastic-free.

It is easy to be discouraged by these huge problems, but discouragement is not a substitute for lack of action, for there are steps almost every one can take.

One of these steps is to participate in costal-cleanup activities which take place throughout the world.

As you may recall, dear reader, exactly one year and one month ago today (on September 16th 2017), I volunteered to be part of of one of these initiatives, a costal clean-up effort which was sponsored by NYC Audubon. It was during that event that I witnessed Canadian Geese feasting on plastic bowls and other materials left behind after religious rituals are performed on the coastline of Jamaica Bay in New York City.

This is a small gesture on my part, but with my limited financial resources as well as my limited time due to taking care of health concerns, being involved in an event like the one I've referenced, is an action I can take.

The other indirect action I've taken is to give folks a reason to be concerned about the plight of birds through my book series Words In Our Beak (pictured below).


The stories (which are told from the perspective of a female cardinal) do not directly address environmental concerns, but they do address a number of concerns that avian creatures live with year around. My hopes are that by doing my doing this, people (after reading the books) will be inspired to take up causes related to protecting wildbirds (and all wild life).