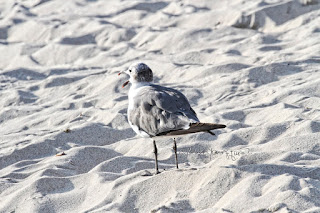 In a recent entry here on Blogger, I mentioned that I had been to Long Beach and learned something new about the Ring-billed seagull: "they pant, like dogs which releases heat through evaporation of moisture along the bird's mouth, throat and lungs" and "because birds lack sweat glands, they do not sweat to cool off like we do. A bird will open its mouth and breath faster, which increases the airflow."

On that same day I noticed a Laughing Gull doing the same thing as evidenced in the photo atop this entry. This avian creature is new to me and marks the twelfth new bird whom I've seen in this Year of the Bird.

My last time seeing a bird who was new to me (who happened to be a gray/grey catbird) occurred on 5/29/2018, an encounter which I wrote here on Blogger at that time.

Be that as it may, since today is Wednesday, the day I set aside for my Wednesday's Wisdom series, I'll be using this opportunity to share some information about the Laughing Gull. After all, part of the definition of wisdom, "or sapience is the ability to think and act using knowledge, experience, understanding, common sense and insight."

And the gull seen here is certainly using his/her wisdom to cool down on a hot summer day, however there are a number of other interesting facts re this bird type.
According to Whatabird.com, "This medium-sized gull has a gray back, white underparts and neck, a black hood and red bill. The wings are gray and white-edged, and black at the tips; tail is white. The legs and feet are black."

These characteristics are evidenced in the following pictures which I took when I encountered this gull. 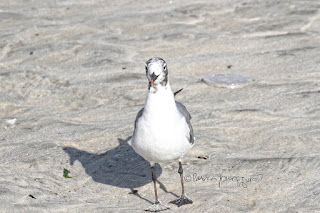 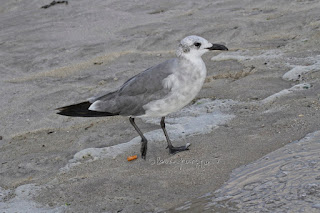 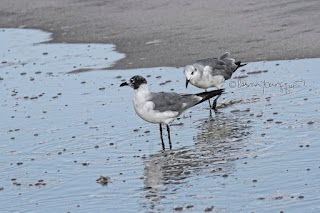 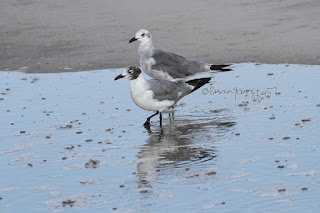 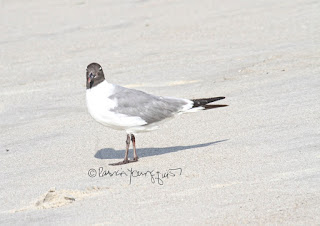 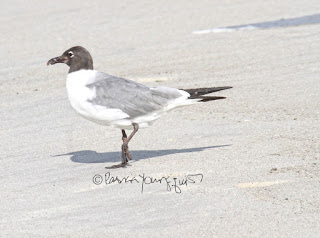 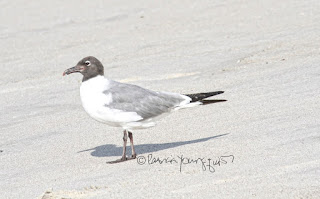 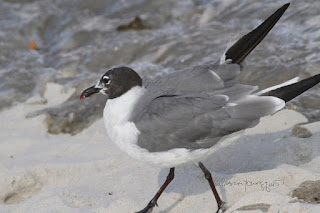 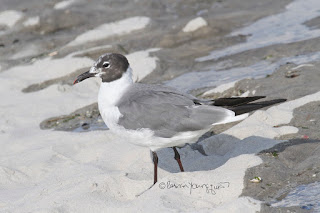 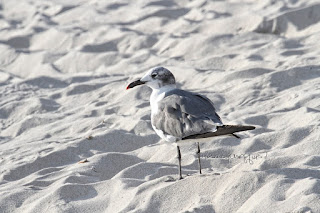 The aforementioned page goes on to say that this bird variety's diet "includes insects, fish, shellfish and crabs."

I'm not sure what the gull was eating when I took the next picture, but as you can see, he/she seemed to enjoy the nourishment. 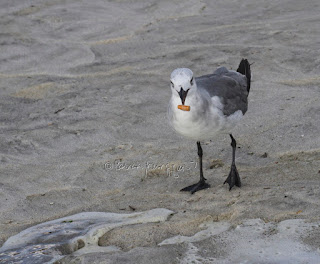 Whatabird.com's web-page explains that the "Laughing Gull has a slow flight with deep wing beats and soars on updrafts. It is named for its laughter-like call. Sexes are similar. (And) the creature lives mainly on the Atlantic and Gulf coasts of the U.S., ranging from Maine down through Florida and Texas. Also occurs along the Gulf coast of Mexico, inland southern Mexico, the West Indies, and along the Baja Peninsula. Spends winters regularly north to Virginia, in smaller numbers farther north. Found in salt marshes, lagoons, and coastal beaches."

This page also states Laughing Gulls are "the largest of the dark-hooded gulls. It is aptly named, as its extended, "ha-ha-ha" call resembles laughter."

These gulls' "laughter" can be heard in both of the You Tube videos posted below and with these, dear reader, I conclude this segment of Wednesday's Wisdom.