Friday's Follow-up to a Follow-up


This past Friday I made this announcement in my entry here on Blogger:"Chris Deatherage, the man who edited and formatted my 'Words In Our Beak* " book series uploaded some of my photographs, including a few of my kaleidoscopic images (that are also within one of The Color Gallery pages on my web-site, which he also designed) to the web-site for Fine Art America (FAA). He has now recently uploaded more of my kaleidoscopic works to FAA..."

In today's entry I'd like to talk about one of the prints, Sunset In Riverside Park, which is one of my images that he recently uploaded to FAA. It can be seen in the photograph atop this entry, which I also included in the aforementioned blog post. This picture shows one view of how Sunset In Riverside Park looked in an exhibition that I had at the Manhattan Borough President's office.

The next set of pictures feature a partial view of my comprehensive one woman show and will give you a better sense of it from different vantage points.


"SUNSET IN RIVERSIDE PARK"  IN AN EXHIBITION

A smaller version (seen in the next picture with yours truly standing by) of Sunset In Riverside Park, was also included in an exhibition called Inner Solstice, which took place at  the Nexus Gallery which was in The New York Gallery Building (on West Fifty-Seventh Street in NYC). 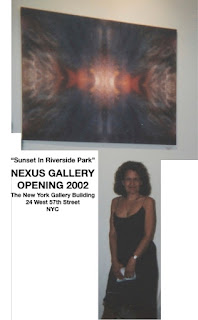 In any event, when I initially created the pattern seen in Sunset In Riverside Park, I had envisioned  my work to be printed on fabric (silk scarves and men's silk ties), but that endeavor was unsuccessful, because at that time, there were no companies that could print a pattern that did not have a "separation," even though I had worked out the "repeat."

It was a very costly endeavor but it was during that time that the proprietor of Nexus Gallery persuaded me to have large prints made of five of my kaleidoscopic photographs and  Sunset In Riverside Park was one of them.

Now, several years later, thanks to Fine Art America Sunset In Riverside Park (as well as all of my other kaleidoscopic photos) can be printed on certain fabric — although my vision of silk scarves and men's ties has never been realized — such as tote bags, duvet covers, and throw pillows, as seen below (respectively).


This image can even be printed on a shower curtain (as seen in the next picture)!


Moreover, Fine Art America can print Sunset In Riverside Park on array of ways in terms of wall art; including acrylic, canvas, metal and wood seen in the following group of pictures (respectively).


FAA also has Sunset In Riverside Park available as a framed print and in poster format.

Additionally, FAA can also render Sunset In Riverside Park into a greeting card (seen directly below) which is something I did in bygone years but am unable to do so at this time.


So there you have it dear reader, everything you could possibly want to know about my photograph Sunset In Riverside Park, which, as you may recall, is the also the image John Montone interviewed me about on 1010 WINS (please click here to listen to the interview).

* Words In Our Beak is a book series (pictured below)...


...that is written from the perspective of a Cam, a female cardinal, who visits my rooftop garden where her stories are set.

Words In Our Beak’s goal is to open readers to a simple understanding of the winged world and their environment. The books are directed to children and adults who are curious about birds, and want to learn about them from a unique perspective. The book includes hundreds of images of flora and fauna, links to movies, as well as to informative narratives that have been created by the author.

At the moment, volume three is complete and Chris is in the process of working with Cam and me on the editing as well as the formatting. This is one of the reasons that I have not been posting as frequently here on Blogger, which is something I explained this past June.