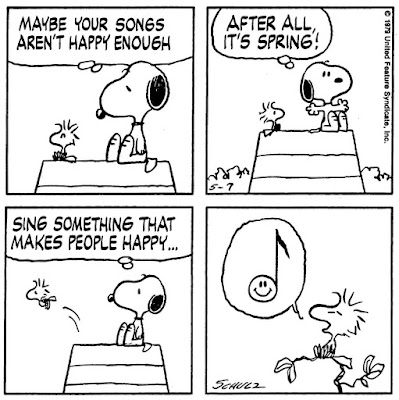 The PEANUTS comic strip that I've posted atop this entry was published 39 years ago today, and upon my seeing it, I was reminded of my initial experience of hearing birds sing in my rooftop garden.

As I've explained in a number of posts (published here on Blogger in bygone years), the presence of wild birds in my rooftop garden was initially brought to my attention (in 2012) by my gardening comrade, Juan V, when he was working in my place and happened to discover a hummingbird.

I had not ever seen a hummingbird here, which is not surprising, because I have “counting fingers only” vision in my left eye and need corrective devices to see out of the right eye.

In any event, Juan felt that if I put out something for birds to eat, I’d probably have some avian visitors. Soon after I took his advice, a female cardinal starting coming to my garden and I could detect where she was by the songs that came out of her beak.

I couldn’t necessarily always see her, but being visually challenged has its benefits: I could hear her from far away and follow her sound with a very long camera lens that served as my eyes.

In the image below, she can be seen singing (with seeds in her beak) from atop a ledge that surrounds my garden.


Some months later, as this cardinal and I got to know each other, I began calling her Cam, and she ultimately confessed that she knew her ability as a songstress, would make her endearing to me.

Eventually Cam also confided in me that people often dismiss female cardinals due to — what some ornithologists have called — ‘dull coloring,’ and focus on the bright red males (cardinals).

I then imagined how a female cardinal might feel about being dismissed due to how others perceive their physical characteristics, and I agreed to help her write and publish her stories, which she has titled Words In Our Beak.

Words In Our Beak’s goal is to open readers to a simple understanding of the winged world and their environment. Set in a rooftop urban garden in New York City, the story is told in the voice of Cam, a female cardinal, who visits it. Words In Our Beak is directed to children and adults who are curious about birds, and want to learn about them from a unique perspective. The book includes hundreds of images of flora and fauna, links to movies, as well as to informative narratives that have been created by the author.

As of this posting, two volumes within her series (seen below) have been published


Cam and I are very grateful to have worked with Chris Deatherage  (designer of my website) who formatted and edited our work, giving Cam a chance to be heard.

My empathy for this bird type being dismissed by certain ornithologists because of her appearance, stems from the fact that I have also been dismissed by a number of people due to various aspects of my appearance.

Earlier in this entry, I explained that I only have what’s considered “counting fingers” vision in my left eye. This causes it to turn inward, making me a target of cruel remarks. I have even been told that my inward turning eye gives me the appearance of a dog going blind.

Additionally, I was born with Neurofibromatosis (NF), and since the month of May (along with being Gifts from the Garden Month and National Bike Month) is NF Awareness month, and we are already near the one week mark for May 2018, I'm including some info re this neurological condition within this blog entry.

One manifestation of NF-1 (the type I have) is that lumps and bumps can grow on any nerve in the body. These growths push through the skin’s surface giving the person afflicted with the condition a bumpy appearance.

Unfortunately, many people fear the condition is contagious (it is not) which can cause uncomfortable situations.

Neurofibromatosis affects an estimated 100,000 people in the U.S., occurring in all ethnic groups. Type One affects one in 3,000-4,00 0 people in the United States. It also affects people all over the world. During the year of 2013, the term Neurofibromatosis, became more widely known because of Pope Francis's embracing Vinicio Riva who lives in Italy and has a severe case of NF-1.

In any event, some people with NF have vision loss as a result of the condition, but, my compromised eye-sight is not related to having NF-1; it is related to other medical circumstances (Keratoconus, Monocular vision, Optic atrophy, and Staphyloma); which I’ve had since birth.

However, the consequences of my having both severe vision loss and NF has impacted my ability to be considered for decent employment, and I'm so grateful to have created a niche for myself through producing the Words In Our Beak book series.