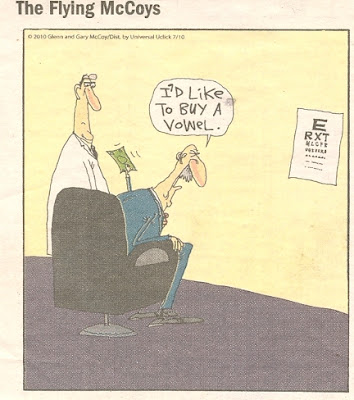 The cartoon posted atop this blog entry was included within one of my Facebook postings this past Friday. In that entry I stated: "This morning, I had an appointment with the eye surgeon who removed a cataract from my right eye in 2014, which was a very dangerous procedure since I can only see out of that eye. In my left eye, I have what is known as "counting fingers only" vision and even that is very blurry. The surgeon removed the cataract from that eye in 2015, but a secondary cataract has developed, which she will remove next month, on June 8th. And, UNFORTUNATELY, I now have a lump growing on the eyelid of the left eye, which needs to be attended to ASAP. Through a referral from my eye surgeon, I've set up an appointment for next week to see what can be done about this. Very disconcerting news for me, especially given my precarious living situation! Obviously, I need to buy more than a VOWEL!"

The lump which I am referring to in that FB entry, may or may not be due to my medical condition of Neurofibromatosis, a condition which I discussed in yesterday's posting here on Blogger.

At my appointment with an eye specialist that is scheduled for the later this morning I will find out if the growth is related to NF.

But rather it is related to my having the condition or not, having NF is N.F. (NO FUN), especially since I don't really have an immediate family member who is willing to listen to my concerns regarding my having this neurological condition.

Family support to anyone who suffers from this is crucial, which is a fact actress Gillian Andersen, truly understands. Her brother Aaron Anderson (who passed away in 2011) was afflicted with this condition and he was blessed to have a family who spoke about it.

During the Anderson family's activism to raise awareness re Neurofibromatosis, the following statement was posted on Gillian Anderson's web-site:

"When he was three, Aaron was diagnosed as having a medical condition called neurofibromatosis (NF). Suffers can break out in tumours, which dramatically alter their appearance. It’s been a big part of my parents’ and my life for 12 years.... It’s been a major part of my growing up and Aaron’s growing up because of the potential devastation of the disease. It’s a neurological disease. Someone with NF can have tumours that grow on the body inside and on the outside... Sometimes it can deform the person - although I shouldn’t use the word deform. It can alter their appearance severely, because you can get large tumors on the face and arms so it becomes more obvious to other people..."

As I've mentioned in prior posts here on Blogger, a number of years ago I contacted Ms. Anderson re a manuscript I'd written which described the inner experience I had growing up with NF-1.

She replied with a note which I've posted (copy) below:

I returned to this particular manuscript at that time, but never completed it to my satisfaction, and I probably will leave it at that. My focus in terms of writing, as many of you may know, is on Cam's book series (pictures of volume one and two are posted below).


Cam and I have already done the prep work for volume three. The story is laid out and the photos which I want to include in it have been grouped into categories.

I truly hope that the situation I am currently having with my eye will be resolved in a positive manner and that I'll be able to continue with my work on subsequent volumes of my book series.