Earlier today I posted my tandem tale for the week and since that time it has been brought to my attention that today is Garden Meditation Day.

According to Holiday Insights (HI), "Per C.L, Fornari, the creator of this special day: Garden meditation day honors the fact that when we're working in the landscape we have the opportunity, if we choose to take it, to let the rest of the world fall away."

Therefore. in honor of Garden Meditation Day, I've posted an image atop this entry which features a partial view of how my rooftop garden looks on this "holiday."

An ID key to what is featured in my photograph can be seen directly below.


The number one (lower left) is referencing one of my bird baths. It often provides much needed refreshment for my avian visitors. The number two is "pasted" atop the container that is home to my kiwi vines which wrap around the railing that surrounds my garden.

The male member of this kiwi vine couple gained notoriety when he narrated my first garden-themed movie, The Kiwi Speaks! Fifteen Minutes of Fame...almost, which can be viewed within my Vimeo channel.

In any event, the number three is indicating the home to my shrub that is known as a Pyracantha coccinea (Orange Charmer Firethorn), which is featured in the kiwi vine's film.

Both of these flora types are included (with cool facts accompanied by photographs) in volume one of Cam's book series (pictured below), Words In Our Beak.


But getting back to my diagram, number flour, is referring to one of my three Heuchera plants, which is a favorite of certain birds due its tubular-like flowers (details re this can also be found in volume one of the book series).

Number five in this picture/diagram is referring to an Elegant Lady Tulip that just bloomed today and number six references my crabapple tree, which is another favorite flora type of the birds who visit my place.

The number seven is "pasted" on the home to my 'Tamukeyama', who is loved by many birds and is featured with them in volume one of the book series.

Number eight is id-ing my Je t'aime Tulips, while number nine is referencing a geranium variety known as Sara's Choice. Number ten is indicating my Continus Coggygria (Smokey Bush), while eleven is referring to the crocuses as well as the "Mouse Ears" (a type of hosta).

Image of this hosta variety growing underneath my smokebush can be seen below, where the first and third photos show it with the "pin-striped" foliage of my crocuses. 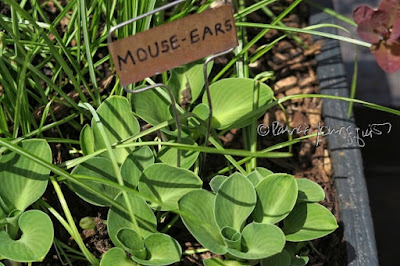 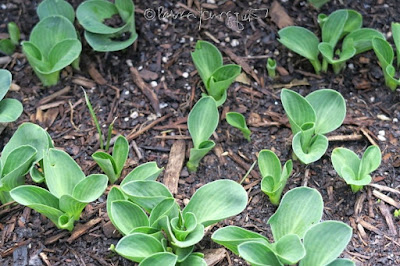 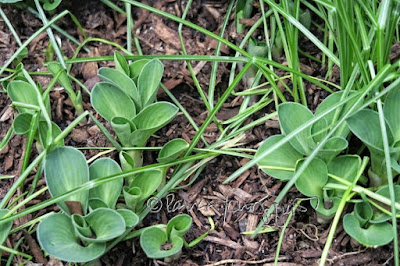 And finally, regarding the numbers affixed to my picture, twelve is referencing where I have my  Crepe myrtle. In terms of the arrows "attached" to this image, here's what they are referencing:

The arrow in the lower left hand corner is indicating where my Japanese Larch (Larix Kaempferi) is standing, while the other "left-side arrow" is pointing towards the home (a very large box-style container) of my Autumn Clematis, which always bloom in the season of fall, where they trail up the trivets that have been attached to my wall (by Juan V) for many years.

This "installation" of trivets is featured in my "kiwi" movie, and cool facts (accompanied by photos) re the Autumn Clematis vine are included in volume two of the Words In Our Beak book series (pictured below):


My Autumn Clematis shares her home with Toad Lilies which will be blooming soon.

In terms of the arrows on the right side of the "diagram" photo, the one at the top is pointing towards my Fagus sylvatica (Beech Tree), the one below that is indicating a variety of lavender, and the arrow after that is referring to my Blumex Tulips 2017-2018.

Meanwhile the arrow at the lower right is pointing at the location of my  H.F. Young Clematis, a vine which trails up a utility pole in the northwest corner of my garden. As of now it is loaded with humongous buds that are about to burst open at any moment.

This particular vine is also included in volume two of the Words In Our Beak book series. Both volumes of this book feature many photographs and amazing facts re flora growing in my garden, therefore, if you don't have access to a garden, dear reader, you can always refer to my books if you want to take advantage of what Garden Meditation Day is designed to do.

For another point that HI makes re this holiday is: "meditation is: letting go of all thoughts, concerns, worries and focusing on just one thing...in this case, what we're doing in the garden. It is as calming as a mantra, or focusing on the breath, to name two common forms of meditation. So those who seek a spiritual retreat, a calming yoga experience, actually have that in their own backyards!"

But, as I just stated if you don't have a garden or access to a backyard, you can still do some garden meditation by bringing my garden to you via Words In our Beak!